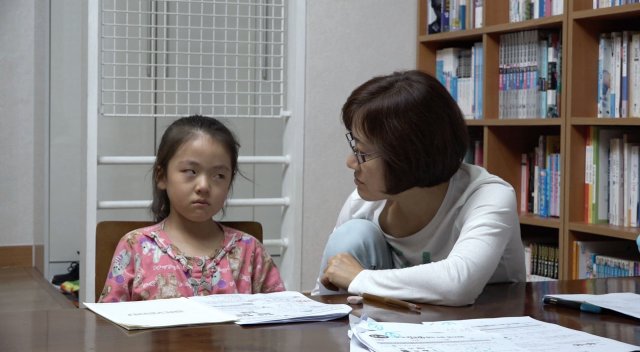 Director Koo Yun-joo was once a gifted child. She loved receiving praise for being smart. So as Koo Yun-joo grew up into a young woman, she was always on the lookout for the next chance to win an award or do something that would be impressive on a resume. In the main moment of nostalgia for "Dear My Genius" we see some grainy old footage of Koo Yun-joo going to space camp in the United States as a teenager, an experience she clearly remembers with much fondness.

But in the present day we find that Koo Yun-joo has the same fate of many a child who believed themselves to be talented. Koo Yun-joo is jobless, and feeling increasingly antagonistic toward society for what she believes to be false promises of how an education could secure her future. From this context we get to the framing device of "Dear My Genius", Koo Yun-joo's adorable lateborn sister who is going through the same phases of idolizing educational achievement because of the praise it prefaces.

"Dear My Genius" is a multifaceted look at South Korean educational culture. We see Koo Yun-joo as having lived through that culture, cognizant of the deleterious effects it has had on her mental health. We also see Koo Yun-joo's sister actively going through that same process, and in between the joy and the cuteness, there are moments where we can clearly see that learning is making her unhinged. We also see their mother, who put both sisters through this process and is only too happy to explain why.

For its chipper tone "Dear My Genius" is a very dark film, at times even verging into frightening. The worst of the youngest daughter's temper tantrums feels like child abuse. Then there's the chilling animated sequences. The first shows Koo Yun-joo realizing, too late, that the path she has been is dangerous and leading to dubious reward. Then her sister begin the same journey. The last animated sequence is borderline horror movie material, as we watch various shapes bloodily tear themselves apart in order to appease the evil god they call knowledge.

The specific arguments made for why South Korean educational culture are toxic aren't particularly new. What Koo Yun-joo adds to the discussion is emphasizing the human element. While people like her mother are pressured and manipulated into fetishizing education, they're not bad people. Everyone in "Dear My Genius" has been propagandized into believing that education is the only way forward, and they struggle to come to grips with the fact that they have been lied to.

Take the all too human portrait we get of Koo Yun-joo's mother, who has for the most part raised three happy daughters who love her very much. It's hard to reconcile this loving maternal figure with the toxicity referenced throughout "Dear My Genius" and Koo Yun-joo walks an unsteady tightrope trying to emphasize to her mom that too much education can be dangerous. Unfortunately that's about the only way to try and make a positive change right now, is one uncomfortable conversation at a time.