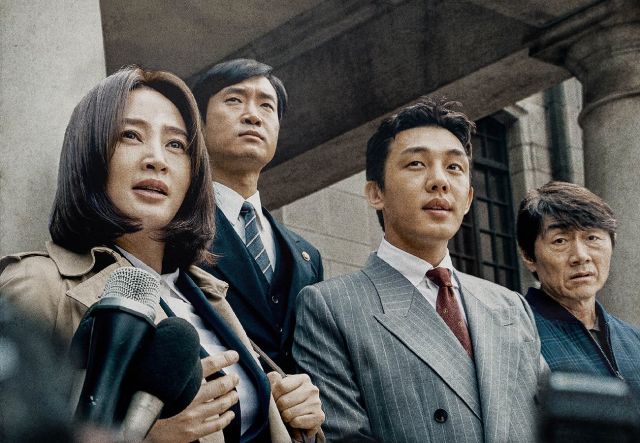 The 1997 Asian Financial Crisis was a watershed moment in South Korean history. The exact causes of the crisis remain ambiguous. The middle steps, though, are well explained by Jeong-hak (played by Yoo Ah-in) in an ominous setpiece that makes the ambitious young businessman look like a con artist selling a pyramid scheme. In short, starting with the withdrawal of foreign investors, huge pillars of the South Korean economy start to crumble. Financial analyst Si-hyeon (played by Kim Hye-soo) also anticipates the crisis- and her attempts to mitigate the damage are predictably ignored.

What Si-hyeon's superiors end up doing is stall for time rather than take fast action to save the economy. Why do they do this? As presented in "Default" the sole rationale was to allow the nation's wealthier citizens time to hedge their assets against the crisis. Normal citizens were encouraged, via news reports, to continue their previous economic activities unabated- like machinery shop owner Gap-soo (played by Heo Joon-ho) who represents the third storyline.

Jeong-hak, Si-hyeon, and the people they run into view the crisis in largely abstract terms. Gap-soo and the people he knows, by contrast, make financial decisions considering money to be a limited resource. While Jeong-hak and Si-hyeon see the horrific consequence of the collapse as observers, Gap-soo has to decide firsthand whether to give into very rational feelings of violence and panic.

Meanwhile, Jeong-hak successfully predicts every stage of the crisis simply by asking what's the most evil, unscrupulous thing powerful people would do in reaction to the latest piece of bad news. His team of cynics does almost nothing, yet profits tremendously from the collapse because in the end that's what the government and the International Monetary Fund do. They reward the people who put the least effort into trying to right the tanking South Korean economy.

Speaking of which, Vincent Cassel puts in amazing work as the leading representative of the International Monetary Fund. If the South Korean economy is a fire spiraling out of control, then the IMF is supposed to act like a fire department. Yet negotiations are conducted under the implicit threat that the IMF would be happy to just watch South Korea burn. Kim Hye-soo's best scenes involve Si-hyeon challenging the IMF over their real motives, and what practical end the reforms they're demanding are intended to accomplish.

The epilogue to "Default" is just a recap of the modern day, and current poor economic conditions that can still be traced to those IMF reforms. Gap-soo, once a proud man with faith in the rules, skirts them in his present day workshop just to survive. His now adult son has to succeed in a merciless employment market where reliable full-time positions are hard to come by, and citizens in one of the world's most allegedly wealthy countries have to live paycheck to paycheck. Jeong-hak's singular moment of vulture-like insight has made him an unqualified success. And Si-hyeon, well, she lives to see a new bubble that could pop everything into disaster all over again.