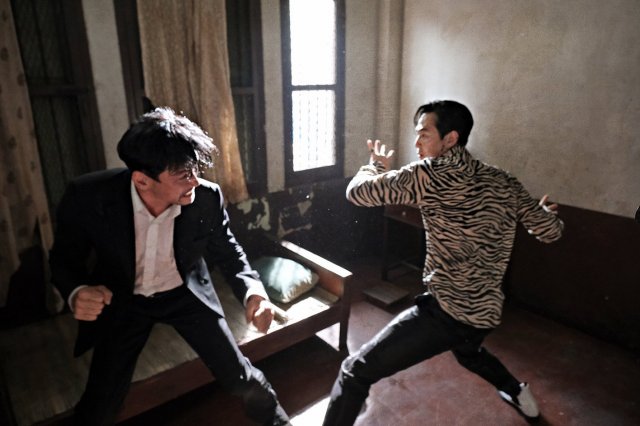 In the opening scene of "Deliver Us From Evil" we observe various persons dispatched from the shadows. These thugs wearing suits aren't sympathetic, yet they feel more inhuman than evil, exuding neither warmth nor fear. The sound of their fury signifies nothing. When their murderer is revealed to be In-nam (played by Hwang Jung-min), the contrast is stark. In-nam is no more warm, sympathetic, or human than the men he's killing. We see quiet grief in In-nam's visage as he contemplates his own soullessness.

Hit-men are a favorite movie protagonist, their coolness contrasting with their cruelty. What makes "Deliver Us From Evil" such a fascinating character study is that In-nam doesn't fit into either of these clichés. He's a broken man whose idle dreams of Panama are just that- idle dreams. However much In-nam wants to live a different life, the man knows deep down that he chose to be an assassin, and that this choice has made the world a worse place.

It's fitting that while the plot ends up revolving around In-nam his main enemy is accidental. His one last job owes its origins thanks to a black market that exists entirely thanks to people like him. The situation is disturbingly poetic. I never got the impression that we were really rooting for In-nam. There's an overwhelming feeling that striking an incidental blow at the criminal underworld In-nam helped to create doesn't come anywhere near close to absolving the horrible life decisions he made to help further this criminal underworld.

The appearance of fellow assassin Ray (played by Lee Jung-jae) as a character foil does little to redeem In-nam. Sure, Ray is nominally more vicious in his approach, and as time goes on we see that Ray himself has little comprehension or appreciation for why he's hunting In-nam down. So what? They're all enforcers of the same vicious system. In-nam doesn't fear becoming Ray. In-nam is Ray, and fully appreciates that his ability to shed crocodile tears doesn't change that fundamental aspect of himself.

"Deliver Us From Evil" works most brilliantly as a subversive take on the highly fetishized assassin film subgenre. Crisp and beautiful as the movie's visuals are, writer/director Hong Won-chan never loses sight of the fact that every scene of this movie represents a tragic, senseless loss of human life. This is true regardless of whether the current perspective character is In-nam or Ray. This morose impression is conserved even in scenes where we'd led to believe their latest victims actually deserve their horrible fate.

"Deliver Us From Evil" also manages the impressive feat of sidestepping obvious xenophobic undertones. After all, most of the movie takes place in Thailand, and the country does not come off as a pleasant place to live. Yet the normal people still come off as decent, a fary cry from the monsters who employ them. I especially liked Yui (played by Park Jung-min), a transwoman forced to make deals with monsters because she knows the existing power structure won't protect her. "Deliver Us From Evil", indeed.