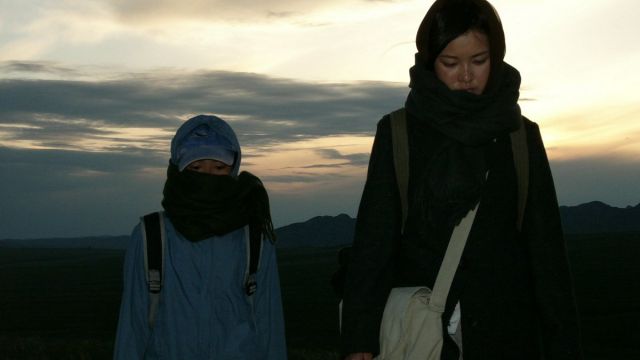 Hangai (played by Bat-Ulzii) is a Mongolian man who's living out his dream- to plant trees in the steppe in an effort to fight off the oncoming spread of desert. Hangai's dream is...not really a very good dream. He's pretty much fighting against inevitability, and it's little surprise that in the opening segment Hangai's wife is able to come up with a better way of using her time than to support Hangai's apparently hopeless battle against nature. From there, Hangai lounges and waits.

I hope you like lounging and waiting, because for the most part that's all there is to "Desert Dream". Director Zhang Lu doesn't provide for much in the way of engaging visuals. What he does provide for is expansive visuals of a part of the countryside that's rarely ever seen, mostly because nobody ever goes out there. This is a part of Mongolia so obscure that the army can run training rituals for tanks and nobody will even bat an eyelash, because it's not like there's anything else going on.

The closest "Desert Dream" gets to an actual story is the appearance of Soon-hee (played by Suh Jung) and Chang-ho (played by Shin Dong-ho-I). But even they don't have much to do, and that's really the entire point of their story. The reason why Soon-hee and Chang-ho escaped North Korea is never made totally clear. What is obvious is that neither mother nor son have much of a plan for what to do in Mongolia, and struggle to even make up their minds on whether or not to leave Hangai's yurt.

Whether this all should count for tedium or relaxation is really just a matter of perspective. There's not really any literal point to "Desert Dream". The end of the movie does see the three lead characters finally come to important decisions regarding where they need to be for the foreseebale future- and oddly enough, life-and-death circumstances seem to play less into this decision as does the question of how much more ennui they're willing to tolerate.

It's all ennui really. It's ennui that is made somewhat more tolerable by the lush Mongolian landscape, with its apparently infinite flat horizons, the illusion of security by way of isolation, and just the simple fact that everybody knows where they stand. But then that's the trouble with ennui. Living a tolerable existence isn't necessarily the same thing as living a happy existence, and a beautiful backdrop can only go so far before a person just wants to see some other less beautiful thing for once.

The metaphor for "Desert Dream" itself as film is a fitting one. I felt no especially positive or negative emotions while watching this movie, because "Desert Dream" is not the kind of film that inspires strong feelings. Even the sex scenes are almost comically subdued, feeling less like important plot events and more, well, this is what people do when they get bored enough. They have sex. It doesn't necessarily mean anything. Like the often vacant gaze of distant horses, it's just life. Take it or leave it.