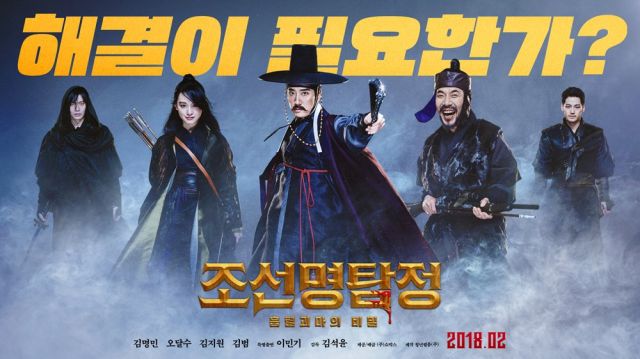 So apparently in the universe of "Detective K" vampires are real. I was a little surprised that the cold open makes this so explicit, since one obvious solution to the movie's central mystery is that all this stuff about vampires was just an elaborate scam. But then, from the beginning Yeoju Wol-yeong (played by Kim Ji-won) is portrayed explicitly as an amnesiac with super strength and other vampire-like powers.

Quite a bit of the humor in "Detective K: Secret of the Living Dead" is merely of the physical variety, as the title character Detective Kim (played by Kim Myung-min) and especially his sidekick Seo-pil (played by Oh Dal-soo) are pushed around by other more substantially powerful characters, all while wearing Joseon-era garb. Conceptually speaking "Detective K: Secret of the Living Dead" is odd like that. The script reads like someone wrote a completely serious Joseon-era vampire mystery, and then some producer arbitrarily decided to throw Detective K and Seo-pil in there to lighten the mood.

I guess they do succeed when it comes to that. Detective Kim is always doing his best to do give cool collected speeches and yet somehow or other some contrivance (usually Seo-pil) makes a point of interrupting the performance, ruining the dignity of the moment. Other times Detective Kim will do a brilliant detective montage that ends up going nowhere, because it turns out that he was actually just guessing randomly.

Given how the detective story doesn't take itself at all seriously, that leaves Yeoju Wol-yeong as the protagonist of the main drama. Her character arc sort of works. I mean, it's sad and all when we finally find out what exactly Yeoju Wol-yeong's lost memories were. I couldn't help but notice, though, that the intrusion of vampires into her story was kind of random. Indeed, a lot of the background information is kind of hard to place. Detective Kim only gets involved with the mystery in the first place because a bunch of murders were committed with fire arrows.

Now, this was because the villain Black Robe (played by Lee Min-ki) has to kill his victims in such a way as to prevent them from turning into vampires too. Which kind of begs the question as to why Yeoju Wol-yeong is not subject to the same restrictions, considering that she's a vampire just like him. For a detective mystery there's surprisingly little exposition about how vampirism actually works in this setting- not that this really matters.

What does end up mattering is that apparently Detective Kim has a personal connection to the case. Which is awkward- I hadn't noticed that Detective Kim even knew the guy who ends up dying in the climax. But then it's also awkward how we watch several dozen people die over the course of this vampire war and yet we're always just one scene away from more silly slapstick. Well, at least "Detective K: Secret of the Living Dead" isn't as bad as "Detective K: Secret of the Lost Island" and its abrupt journey to tortured orphan island. Take that as an endorsement if you want.