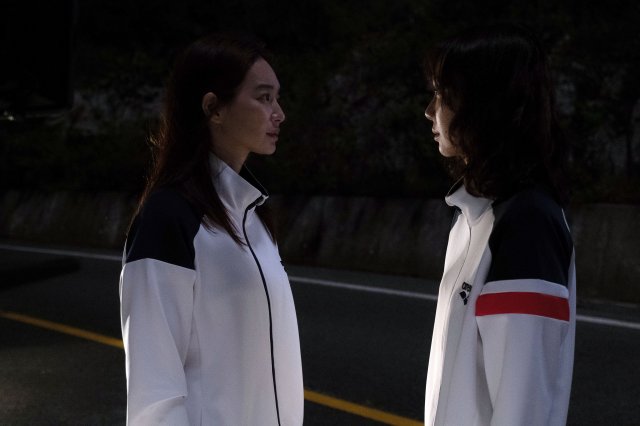 I-yeong (played by Shin Min-a) is a champion diver. Her best friend Soo-jin (played by Lee Yoo-young) isn't, despite Soo-jin being the one to introduce I-yeong to diving when they were still just kids. With Soo-jin just about ready to give it up and retire from the sport, I-yeong makes a daring, aggressive effort to become her partner in synchronized events. Then something bad happens, although it's quite some time before "Diva" spells out why.

"Diva" isn't really a good description of I-yeong herself. She doesn't act particularly arrogant. The word does work somewhat as a weak pun of diver although mostly "Diva" refers to the presentation. There's an operatic quality to both the music and the visuals. The moody soundtrack evokes tension with restrained, epic beats, emphasizing that the action is on a grand scale despite the drama itself being very personal. Then there are the gigantic diving venues, with towering appartuses thoroughly emphasizing that it's a long fall to the water.

"Diva" is mainly focused on this foreboding mood rather than its own mystery of what happened to Soo-jin and why I-yeong doesn't seem to remember anything. The few clues we do get don't really go anywhere, and actually work to muddle what genre of movie "Dive" is supposed to be. Moments of sinister vaguely parsing whispering, and rumors of suicide linked to bursts of talent in certain gifted divers hint at a possible ghost story, though this is all secondary to the focus on I-yeong's mental state.

On that end, I-yeong tremendous guilt about how Soo-jin hasn't had a career as successful as her own. But she won't verbalize to any other character, or even herself, just why she feels such a strong professional responsibility toward Soo-jin. So I-yeong frustrates herself with cryptic hallucinations where people act accusatory. Coach Kim (played by Lee Kyu-hyung) tries to keep I-yeong grounded in the real world, but with little success.

The cause of I-yeong's apparent post-traumatic stress is eventually given a mostly satisfying explanation. Yet "Diva" ultimately lacks much staying power because writer/director Jo Seuk-yeah is oddly noncommittal toward a single core concept. There are several nasty looking head injuries, some of which are far more visually evocative than others. But that's not really a theme, and in practice just comes off as trying too hard to force an emotional reaction.

I'm tempted to blame co-writer Yoo Young-sun for integrating too many horror elements but honestly, at eighty minutes "Diva" is such a short movie the main problem with the original script was probably just that it wasn't long enough for a feature film. In a way the strong technical aspects of "Diva" actually hurt the movie. Had it been produced as a drama special on a smaller budget, there likely would have been more emphasis on the character relationships, or lack thereof. As scripted here, I-yeong is a fairly dull cipher- we don't even get to see the evil deed she did as a child to set a sinister underline for her relationship with Soo-jin.