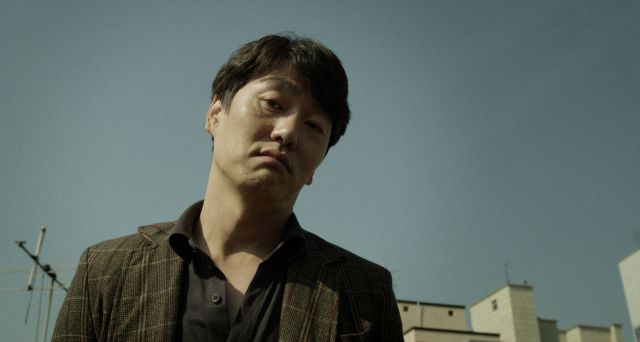 Hyeong-sin (played by Kim Sun-bin) is a gangster who makes his living by kidnapping Koreans abroad and extorting their families for money. Don't expect "Dog Eat Dog" to get sentimental about Hyeong-sin's greater humanity or any nonsense like that- Hyeong-sin's motivation is pitifully simple, and his behavior grotesquely thuggish. Hyeong-sin is no fetishized übermensch serial killer- to the contrary, "Dog Eat Dog" far more correctly and unsettlingly notes that men like him are much more accurately described as horrific animals.

But don't go into "Dog Eat Dog" expecting some kind of cartoon about a mindless psychopath. Directors Hwang Wook and Park Min-woo-I paint a much more unpleasant picture by showing off Hyeong-sin as a monster who thinks. Hyeong-sin terrorizes his victims to get what he wants, not through physical force so much as emotional intimidation.

What's especially frightening, though, is the man's sense of restraint. Hyeong-sin consciously avoids lapsing into self-parody, because he knows it's the illusion of morality and control that makes people think he can be negotiated with. Hyeong-sin, and the other members of his gang, are able to act as they do precisely because they know most normal people will avoid violence if any other possible alternative is available. One character briefly gains an incredible opportunity to fight back- and predictably fails for this exact psychological reason.

This is the true face of the so-called "superior man" once imagined by Dostoyevsky. Hyeong-min isn't evil for the sake of being evil- he's evil for the sake of earning money. His cohorts in the gang are the same way. It's only by transcending their humanity that they're able to accomplish this. At multiple points Hyeong-min comes up with comically elaborate rationalizations about how the current situation isn't technically his fault. It's something Hyeong-min can do mainly because of well-practiced sociopathy.

"Dog Eat Dog" is, for all these reasons, an immensely effective look at what evil lurks in the hearts of men. It's the overhwelming ambience of reality that does the most to make this film so unsettling. The characters are mere thugs, and when they aren't directly engaged in vile behavior they're still just plain unpleasant to be around.

It's an especially unpleasant fact to take in regarding the film's basic conceit. When traveling overseas, usually most people worry about coming under attack from those dirty foreigners. It's an uncomfortable truth to appreciate that in unknown territory, it's your own people that should really be mistrusted- precisely because they know they can get your trust without really earning it.

Unfortunately there's not much in the way of catharsis to be had from the proceedings. Matters end terribly, as to be expected from a system that's this well-planned out. There's little joy to be had in justice that was won for entirely the wrong reasons. If any moral can be gotten from "Dog Eat Dog", it's that we should be ashamed of ourselves for ever even considering acting remotely like Hyeong-sin. And what's more, should we find ourselves faced with a Hyeong-sin in our own lives, don't bother negotiating. Get some outside help, for pity's sake.