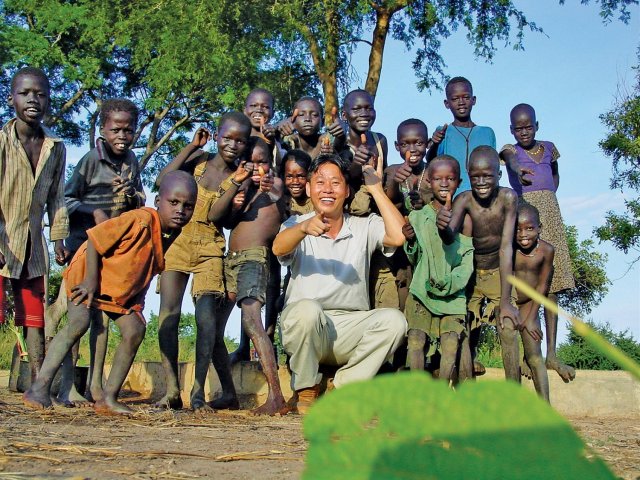 Lee Tae-seok was a trained doctor and musician who spurned a worldly life for the Catholic priesthood to instead minister to people in war-torn Sudan way back in 2001. Lee Tae-seok continued this mission until his death in 2010. Later that year his missionary work was immortalized in the award-winning KBS documentary "Don't Cry for Me Sudan". During his lifetime Lee Tae-seok was also highly decorated for his charitable work.

Given all of that, it's a bit strange that the sequel documentary "Don't Cry for Me Sudan: Shukran Baba" is coming out now, ten years later. We're actually farther away from father Lee Tae-seok's death now than his death was from his first arrival in Sudan. The sheer datedness of this documentary is difficult to ignore. Nearly all of the footage is extremely grainy, and there's surprisingly little information provided to contextualize what's been going on in Sudan in the last decade during Lee Tae-seok's absence.

For an allegedly secular production I was also surprised at how "Don't Cry for Me Sudan: Shukran Baba" contains quite a few religious overtones. The only references to the political conflict that created the miserable situation for the people Lee Tae-seok ministers to explicitly outline Muslims as being the main culprit. This struck me as a bit of an oversimplification, and not a terribly relevant one given that the community Lee Tae-seok ministers to appears to be suffering from general issues of poverty rather than those of war.

The extremely generic nature of this documentary was also a point of frustration with me. The best missionary documentaries also function as travelogues for the often obscure regions the missionary in question ministers to. I've learned a lot about rural life in distinct locations throughout India, Indonesia, Malaysia, Vietnam, and the Phillipines from such documentaries that really expanded my understanding of how poor people live in these countries.

I learned little comparable information from "Don't Cry for Me Sudan: Shukran Baba" since as far as I could tell all Sudanese people do is just sit around and act generally pitiful. Now, to be fair, director Kang Seong-ok does not portray them as completely helpless. Once Lee Tae-seok starts teaching the kids about music, he is impressed by the sheer speed with which they are able to adapt to musical instruments. Their rhythm is perfect- all that's missing is an understanding of musical notation, a language which is easily taught to people who already love music.

As to why Sudanese people love music- I have no idea. Do they have traditional songs? I don't know. The documentary doesn't say. It's too focused on talking up Lee Tae-seok's accomplishments and background to really get into his actual relationship with Sudanese people. Consequently they feel less like actual people and more like props to prove how great Lee Tae-seok is for giving then medical treatment, musical lessons and, presumably, the gospel of Jesus Christ our lord and savior. A serious Christian may find something of interest here but I was very unimpressed.