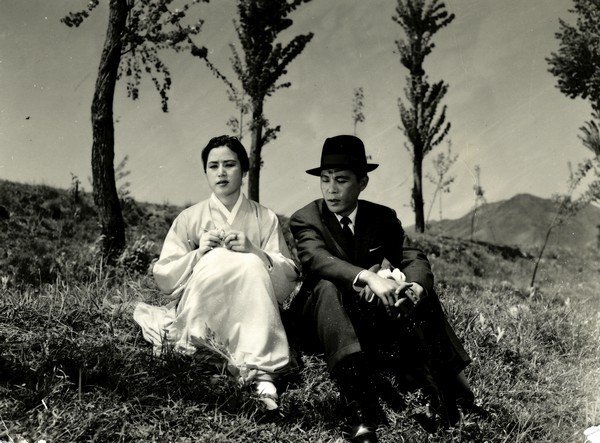 If there is a line that, when surpassed, can deem a film as "too melodramatic", then Shin Sang-ok definitely moved over it with "Dongsimcho", a movie that does make a comment about the state of women in Korea in the 50s, but overall, falls victim to its intense sentimentalism and excessive story.

Lee Sook-hee is a 38-year-old widow who lost her husband in the Korean War, and is now living with her only daughter, Kyeong-hee, trying to make ends meet after the dress shop she was running failed, following her getting conned out of all her money. Her situation would be even more dire if the brother of a friend, Kim Sang-gyoo, had not had loaned some money to fend off her debtors. Expectedly, the two of them have fallen in love during the time they spent together, but Sang-gyoo is engaged to the daughter of his boss, Ok-ju. The debt and their feelings continue to connect the two, but the situation is very difficult, particularly since Sang-gyoo's older sister, Mrs. Kim pressures both him to proceed with the marriage and Sook-hee to return the money, that will allow her brother to invest in the publishing company he works for and move on to better things. Sook-hee is thinking of selling her house to pay off the debt, while Kyeong-hee experiences an intense coming-of-age when she learns about her mother's situation.

Allow me to start with the pros of the movie. To begin with, the presentation of the hardships a woman faced in the 50's is quite realistic and well-depicted, with Shin Sang-ok highlighting the fact that despite women being able to own their business, they were far from being emancipated, particularly concerning romantic relationships. That Sook-hee completely fails her business and has to rely to a man to pay off her debts is a subtle but rather eloquent comment about women's entrepreneurial capabilities. As the concept of "what would people say" actually separates the two protagonists, Kyeong-hee's attitude, and particularly the way she matures by realizing her mother is also a woman is also well presented. The generational gap, as depicted through the difference in the way mother and daughter dress, with the first appearing only in traditional attire and the latter with western clothes, is another concept that has been fitted well in the whole narrative. 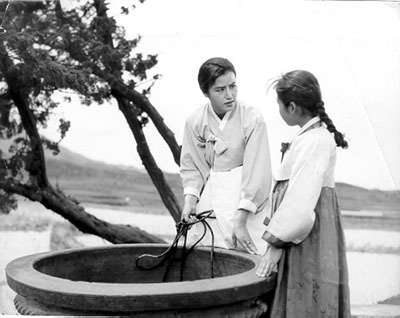 Furthermore, the acting is on a very high level, despite the evident excessiveness in the ways of many characters, with Choi Eun-hee as Sook-hee and Kim Jin-kyu as Sang-gyoo portraying both their bottled up feelings and their struggle in their interactions with others regarding their relationship, in the best fashion. Ju Jeung-ryu as Mrs. Kim provides a great "villain", particularly in the way she " bullies " Sook-hee, while Un Aing-ran is quite convincing in her transformation from a naive girl to a disillusioned youth.

Lastly, Lee Hyeong-pyo's cinematography captures all the different settings, offices, rich and poor houses and the country, with realism and artistry, allowing the protagonists to shine in the best fashion through his framing.

At the same time, though, the film suffers from a script that could only be described as excessive, with the two lost trains highlighting the fact in the best way, as much as Sang-gyoo's illness, who, obviously, can be attributed only to the suffering of the heart. The constant unlucky occurrences, the fact that all the characters seem to be in a perpetual state of suffering, the concept of the selling of the house, which is overplayed intensely, and the duration of the movie, that extends to more than two hours, really bring the whole thing down. That the comments are completely on-the-nose, and the lack of humor (the "I am asking for a friend" concept may seem funny now, but it was fully legit at the time) also add to this sense, with the movie becoming tiring after a point, even more so due to the reluctance of the protagonists to make any decision.

"Dongsimcho" has some good points, but overall, emerges as a rather faulty effort to draw the audiences through melodramatic notions, which result in a rather tiresome film.