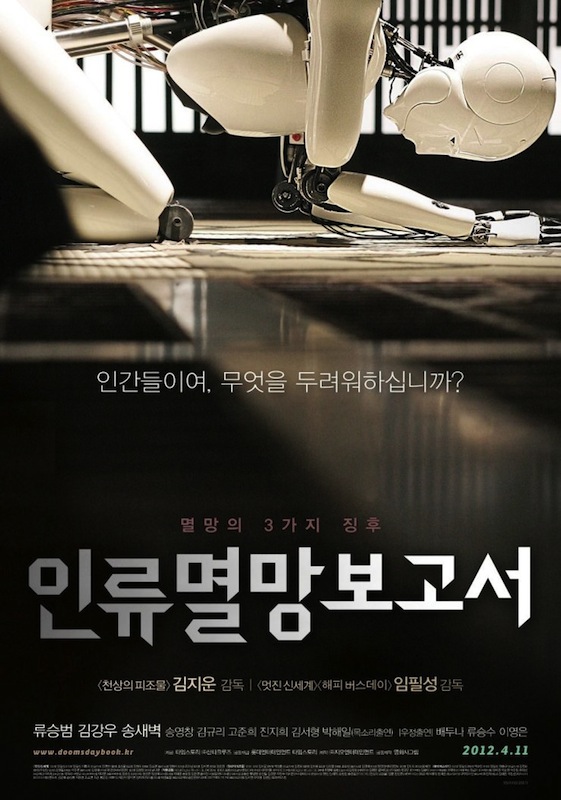 The inclusion of omnibus films within popular Korean cinema seems to me to be a curious phenomenon. Recent films such as "Romantic Heaven", "Sorry, Thanks", and "Horror Stories" have shown that there is interest for these more compact modes of storytelling. Still, there presence within contemporary Korean cinema suggests a possible niche or gap in the market that filmmakers such as Kim Jee-woon ("I Saw the Devil" and "A Bittersweet Life") and Yim Pil-sung ("Hansel and Gretel" and "Antarctic Journal") are willing to gamble on.

In "Doomsday Book", three unrelated stories are presented under the banner of the apocalypse and mankind's moral decline. The territory each of them claim is distinct, ranging from a human induced zombie outbreak, politicised spirituality and moral decay within the uncanny valley, and an obscure telling of wish-fulfilment as the world waits for its destruction. This is the space Kim and Lim have played within as they tell their stories of destruction, love, morality, and hope.

The first film, "The New Generation" or "Brave New World" by Yim Pil-sung, boasts the performance of Ryoo Seong-beom and Go Joon-hee (who also starred in Lim's "Hansel and Gretel") in a bizarre love story set during the onset of a zombie outbreak. The zombie genre has never really been tackled within the confines of Korean culture, and for this reason the film's first short was especially fascinating. In "The New Generation", Lim offers up a harsh social commentary on the demise of mankind, suggesting that the virus arose out of societies incessant drive to progress and advance. You won't need the biblical quote at the end of the film to put in all into perspective.

"I tried to make a black comedy, with people turning into zombies due to the recycling of food and drinks" – Yim Pil-sung

A motif that Lim makes good use of, although perhaps abuses later on, is that of the media and its function of informing the public of their impending doom. In the third film, "Happy Birthday", this is what takes up most of the screen time, as the broadcast media continues their role even when their function is seemingly without purpose or consequence. Lim specifically targeted this aspect of his narratives to pair an uncomfortable sense of irony with some of the 'dark humour' he mentions. Its inclusion in "Happy Birthday" probably held too much ground though, as Lim pushed its function further than perhaps he should have. Unfortunately, it turned out to be this short's saving grace, as Lim struggled to find a meaningful pivoting point for this zany and surreal doomsday scenario.

"I think that if the Earth is destroyed it's probably not going to be from a big war or nuclear bomb, but by something really tiny. Playing off of that, I came up with the idea of an 8-ball " - Yim Pil-sung

Between Lim's two shorts is Kim Jee-woon's "Heaven's Creation", being perhaps the flagship story of this omnibus film. In the near future robots have been successfully integrated into modern Korean society, performing many functions and task with all sectors of society. These robots are monitored and serviced by a large corporation that still maintains control over them and their functioning. "RU-4" is the humanoid appliance under question, as a religious group has hailed him as Buddha reborn, claiming he has achieved enlightenment and nirvana. Since being a religious phenomenon is not what this line of robots was designed for, the company steps in and challenges the group's claim about their RU-4. Kim has posed a very interesting and philosophical question here as he flirts with the trenches of the "uncanny valley" as well as human constructs of spirituality and perception. A robot that achieved the highest level of spiritual enlightenment is a twisted and progressive presentation on matters concerning creation and transcendental theology. All a bit tainted by some rough handling of the film's climax, as the head of the robot corporation and the Buddhist members start preaching to one another. It's all a little self-righteous and tactless for my liking, but it wasn't enough to destroy my fascination with the film's message and the questions posed.

Overall, these three films probe some exciting new territory, imagining senarios that I would love to see be expanded upon and worked into a feature film. In retrospect, Korean omnibus films such as this exist with the same level of uncertainty as our Buddhist RU-2 unit, but the mere existence of such films within the mainstream is a positive sign of acceptance for the shorter format, as well as a stable testing ground for new ideas and stories that would not have otherwise been told.