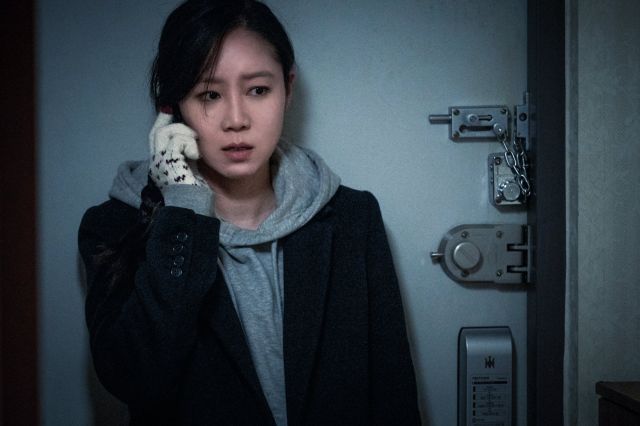 Sans context it's easy to mistake the villain of "Door Lock" as the spouse of Kyeong-min (played by Gong Hyo-jin). The more context we get, though, the clearer it is that Kyeong-min is a very harried woman who barely even has time to get up in the morning, let alone have a boyfriend- or more immediately relevantly, notice that anything suspicious is going on. It's only by random coincidence that Kyeong-min realizes something strange is afoot regarding her mechanical door lock.

"Door Lock" is a mystery thriller that makes the most of socially relevant context. Take Kyeong-min's employment. As a non-regular employee at a bank, Kyeong-min is at the mercy of her employers as she feebly hopes to obtain a more financially secure position at the end of her contract. Irregularities in Kyeong-min's schedule make her an obvious target, such that basically every male character in the movie is a possible suspect.

I liked the implication here that all men are not rapists, it's just that any one man can be a rapist. And for a woman like Kyeong-min, there really isn't any way to tell the difference. The mystery man who's been sneaking into her apartment is ineffably nice and takes great pains to avoid violating Kyeong-min, adhering to a weirdly technical ruleset that is nonetheless tremendously creepy and terrifying. Other men are superficially nice but demonstrate passive aggressive signs of latent hostility. Still others are extremely rude and even dangerous but only if provoked.

This is all too much for Kyeong-min to handle. Her best friend Hyo-joo (played by Kim Ye-won) navigates the situation a little better by showing better pluck, but ultimately both women are frustrated by a highly impersonal anonymous society where no sense of collective responsibility makes it frighteningly easy for the villain to pick victims off one by one. A particularly magnificent setpiece is a back-and-forth chase in a gigantic condemned neighborhood, where oppressive emptiness underscores the danger Kyeong-min is in even as she utilizes highly ironic survival tactics.

The technical design of "Door Lock" is superb in this regard. Director Lee Kwon builds the scary, thrilling mood largely through tension rather than shock. This is what accentuates the fear factor- Kyeong-min knows that any given situation only has a finite number of plausible resolutions. What "Door Lock" consequently lacks in surprise it more than makes up for by emphasizing the story's puzzle-like elements, leaving us to wonder, like Kyeong-min, what the best next move is and whether the last move was a mistake.

A few of the finer plot points warrant quibbling, but only quibbling. While the villain demonstrates some improbably fast movement, for the most part he operates under mortal restrictions. Besides that, director Lee Kwon wisely decides to never let us get a good look at the guy. This isn't just to keep his identity a secret. Monsters hiding in the dark are scary because we can't see them and know what they're capable of. Even glimpses of that horror are enough to turn Kyeong-min into a terrified wreck.