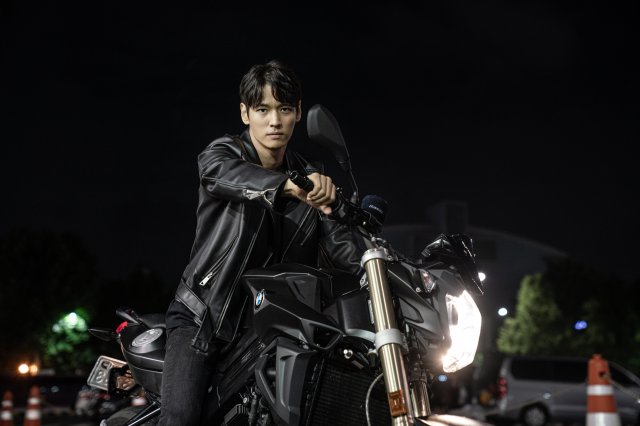 I could tell that "Dragon Inn Part 1: The City of Sadness" was intended to be the first in a series of films because, well, the title makes it pretty obvious. But aside from that I was morbidly impressed with the sheer degree of disinterest director Choi Sang-hoon-II had in explaining who any of the movie's characters even were. Everything just seems like an excuse for some guy wearing a motorcycle helmet to go around punching people.

Don't get me wrong I love a good fight scene as much as anyone, and the ones in "Dragon Inn Part 1: The City of Sadness" are quite solid. Incidentally the title is a bit of a misnomer. The titular inn is not a hotel, it's the Chinese black noodles restaurant where the team of crimefighters hangs out. Who are these crime fighters? Why do they fight crime? Why is their headquarters a Chinese black noodles restaurant? Why are there these random conspicous scenes with a priest played by Oh Ji-ho, the closest thing this movie has to a star? What's with all the questions? Do you want to read a Wikipedia article or do you want to watch the motorcycle guy punch people?

I'm only being slightly facetious here. Screenwriter Han Seung-yeop is quite obviously expecting the viewer to be familiar enough with how such stories work that we don't really overthink what's going on. Consequentially most of the script is fairly bland. It's functional enough as a vehicle for decent action scenes, although the story takes a bit of an awkward turn at the end with all the dramatic catharsis falling on an only barely established character relationship.

For a largely unknown cast working with a rote script the performances in "Dragon Inn Part 1: The City of Sadness" are quite good. Ji Il-joo is compellingly if counterintuitively leads by being reactive and listening to people. This makes him quite attractive in comparison to the overly smug Seung-jin (played by Jang Eui-soo) and the overcompensating Yong-tae (played by Bae Hong-seok). I liked the tension within the overall crimefighting unit. They're all young and kind of stupid, in different ways.

Ye-joo (played by Johyun) is the surprise breakout performance of the movie, as a convenience store part-timer who's trying to break into acting. She plays off great with the leads with a fairly compelling subplot that goes into why young women should never, ever accept drinks they haven't seen come straight from the bottle. It's a pity her storyline just trails off after a certain point, since it's the only one I was really paying attention to.

"Dragon Inn Part 1: The City of Sadness" isn't a particularly bad movie, it just feels kind of rushed since the title alone makes it clear there's pretensions of long-term success on streaming platforms. Still, I can't help but feel a little miffed that the closing teaser for "Dragon Inn Part 2: The Night of the Gods" suggests a considerably weirder and more interesting plot involving a cult. Well hey, at least it's something to look forward to right?