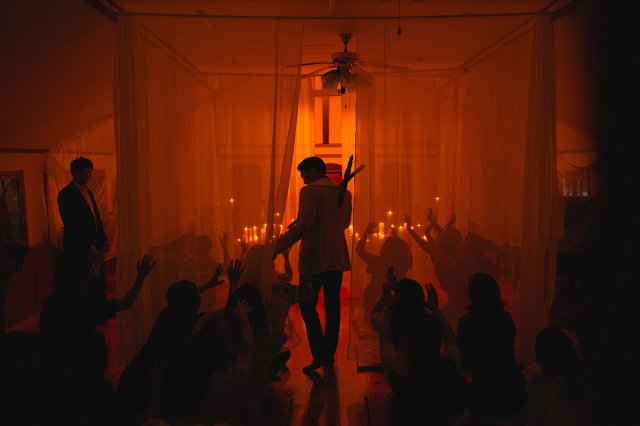 Despite this it takes a really long time Ji-hye (played by Park Jeonghwa) to actually infiltrate the cult. Which I don't think qualifies as a spoiler, both because this is very obvious from a narrative standpoint but also because Ji-hye doesn't really serve any other function on the team. President Kwak (played by Jung Eui-wook) is the leader, Seung-jin (played by Jang Eui-soo) is the hacker and Cheol-min (played by Ji Il-joo) is the muscle. I could never quite figure out why Ji-hye was even around in the first movie, except to complete the love triangle.

That element is also sort of at play in this movie, but Cheol-min is delightfully oblivious and disinterested for a leading man. He has a fair amount of plot in the form of agonizing over the events of the first movie. Ohhh, and I guess he also knows the guy whose technically unrelated case ends up related to the missing person case. It was so obvious those two were going to connect together I really did feel like I was just waiting for the plot to catch up to what I already knew was going to happen.

Better elements include Seung-jin trying to branch out into doing the motorcycle punching guy job himself. In one of the better nuances, particularly for direct to video flick like this, there's the neat implication that Seung-jin is not so incompetent that he'll get in the way. That's the sweetest kind of compliment, the one that's made with enough reservations you know it's not there solely for the sake of flattery.

But by and large "Dragon Inn Part 2: The Night of the Gods" is less about plot and more about trying to maintain a certain mood. There's a neat creepy menace at play here as regards all the villains. Kudos to director Choi Sang-hoon-II for having managed to master the fine art of ominous lighting. Despite the general mundanity of the plot I liked how the villains constantly came off as sinister ethereal entities.

The actual goons backing the cult up are actually less menacing by comparison, since they just wear suits and it seems inevitable that Seung-jin will tear through them with little trouble, his actual antagonist being his internal demons. Not that those are very convincingly dealt with, mind you, but "Dragon Inn Part 2: The Night of the Gods" is a very workmanlike project. The movie aims for that sweet spot of plucky action noir and acquits itself quite well on that front, the above average tone doing a lot to lift up the average story.