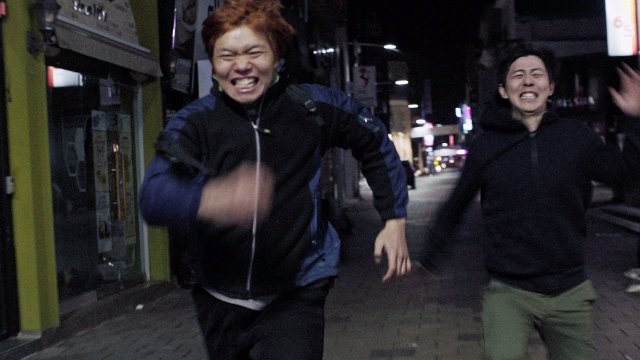 Geun-soo (played by Hong Geun-taek) is a homely looking North Korean defector. Upon arrival in South Korea he gets put into an equally homely looking apartment, and prepares himself for an exciting career working as a hair stylist. But things take a turn for the worse when he meets delivery guy Ji-hyeok (played by Cha Ji-hyun), a petty criminal with many bad ideas, little foresight, but just enough competence to come out ahead in a typical short term hustle.

"Dreamer" is the story of these two men, with little hope or prospects and even less camaraderie, becoming criminal masterminds. It's a lot less exciting than it sounds. Real criminals don't go around punching people or looking cool. Mostly they just skulk around in the night, picking up ominously located delivery parcels, and trying to hunt down random contacts. Even the actual professional criminals in "Dreamer" aren't that competent. Finding people is hard.

Even people as conspicuous as Geun-soo and Ji-hyeok. In one of the many subtle details of "Dreamer" writer/director Jo Sung-bin makes a point of having Ji-hyeok wearing the same highly visible red North Face jacket for almost the entire movie, totally oblivious to the fact that this wardrobe makes him trivially easy to identify. Geun-soo is at least smart enough to realize how much danger they're actually in, but attempts at a long term solution go awry as Geun-soo and Ji-hyeok realize they don't know how to launder money.

They can't even launder other things properly. So many minor conveniences we take for granted in daily life are brilliantly spotlighted here right down to how losing a pair of shoes can be a surprisingly big deal. The foreboding nighttime cinematography of "Dreamer" makes it clear that our two lead characters are constantly skirting on the edge of disaster. There is no greater metaphor for their awful situation than that they're stuck having to rely on each other, of all people.

"Dreamer" also makes excellent use of Geun-soo's identity as a North Korean defector just because of the sheer irony of his situation. Supposedly people defect from North Korea so they can be free. Well, Geun-soo is free now. He's free to bumble around looking for money. He's free to run away. He's free to solve his own problems. Geun-soo, and Ji-hyeok for that matter, are miserable with this supposed freedom. It leads them on a downward spiral so bad they both end up trying to escape their own freedom, in bizarrely contrasting ways.

I especially loved the entire grim succeeding irony of the final three scenes. We see one character possibly making an emotional revelation, another one getting sucker punched by a plot twist that was in retrospect predictable, and then finally, a spiteful self-destructive move that preempts a happy ending for anyone. This is what life looks like for people actually trying to make something from nothing. People in that lousy situation are more likely to end up like Geun-soo and Ji-hyeok than they are to actually get rich.