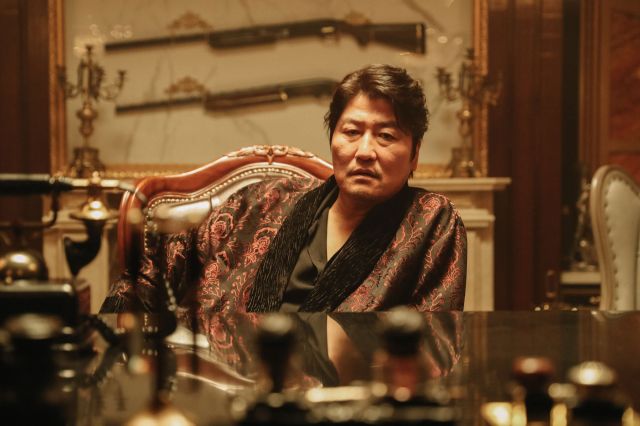 Archival footage explains how the Japanese discovered meth, and decided to use it during World War II to make their soldiers sharp for the war effort. This predictably resulted in a lot of veterans becoming drug addicts in the decades after the war, and facing local crackdowns, Japanese crime lords turned to suppliers in South Korea to pick up the slack. So it is that in the seventies bumbling fishmonger dad Doo-sam (played by Song Kang-ho) tries to get in on the action.

A lot of drug lord genre movies make being a drug lord look really cool. Tragic endings where the protagonist pointlessly dies at the end doesn't make anything he does up until that point look any less cool. Doo-sam, by contrast, always looks like a giant dork. His main redeeming quality is excessive stubbornness. Doo-sam will face a near-death experience one day and come back the next eager as ever to become a major player in the international drug trade.

Doo-sam's inevitable success is largely a result of attrition. Somehow or other he always manages to survive encounters with people who are willing and able to kill him, either by acting as subservient and pathetic as possible or choosing to back the right team in a bare knuckle brawl where every warm body counts. The best such scene is a wild, winding sequence through a major Japanese hotel, where cheerful nineteenth century orchestra music is an amusing contrast to grown men clumsily stabbing each other in narrow hallways.

Most of the background music just seems like whatever Doo-sam thinks will make him seem like a smart cultured man. In reality he just has a limited reference pool. There's classical music for the epic scenes, popular Korean music for lighter moments and whatever American LPs happen to be lying around for when everyone's doing a hit and wants to feel, like, deep, man. The tunes are almost never actually appropriate for the situation, especially if you're listening to the lyrics, and Doo-sam is exactly the kind of guy who doesn't.

Even Doo-sam's own comeuppance is more a matter of willpower than it is actual failure. Prosecutor In-goo (played by Cho Jung-seok) is shown to be a man of above average competence, but only just barely. Doo-sam is able to successfully outwit In-goo mostly by just following basic advice from his colleagues in the narcotics industry. He stops doing so because...well, look at this way. Doo-sam is a dreamer. Even when his dreams come true, Doo-sam just comes up with more elaborate dreams, shooting up as necessary in order to more effectively hallucinate them.

The fundamentally rude joke at play here is that, contrary to popular belief, people seriously involved in the drug trade are not necessarily all that smart. Nearly every character in the movie gets sucker punched at some point because they are really bad at accurately gauging imminent danger. Our hero ends up spending a lot of time at a pig farm, just because it smells bad. "Drug King" is not a noble or glamorous story- so don't go in expecting one.