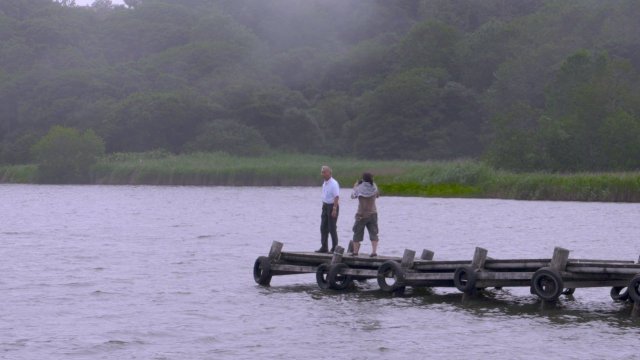 Some fifteen years ago director Kim Mi-rye was working in Japan documenting active Japanese labor movements when she learned of the radical "East Asia Anti-Japan Armed Front" from the seventies. It's easy to see how they made such a strong impression on Kim Mi-rye, a Korean woman. Despite being Japanese themselves, the Armed Front hated the Japanese Empire and saw the then current Japanese government as a reincarnation of that power. The South Korean government, then, being little more than a puppet state equally oppressing its own people.

"East Asia Anti-Japan Armed Front" isn't too big on theory if only because most of the surviving terrorists aren't all that clear on their exact motivation themselves. They were idealogues who wanted to make a point more than they did to work toward a coherent long-term goal. The 1974 Mitsubishi Heavy Industries Bombing and further attacks by the Wolf sect of the Armed Front made that point at the time, even as now they've been largely forgotten.

This documentary serves as a reminder that the Japanese are not as homogenous a group as some people would like us to believe. The Armed Front recognized that the Japanese Empire had as little regard for its own people as it did for those of other countries. They also recognized that Japanese corporations benefited during the war much as they did in the present day. The immortal Mitsubishi, much like the Japanese Empire, has been allowed to regain its honor in nostalgia for those who can't remember what life was actually like in the world they created.

The main driving force of "East Asia Anti-Japan Armed Front" is to just ask, why is that? At the time of the Mitsubishi Heavy Industries Bombing, a sizable part of the population was old enough to remember the war and the Japanese Empire, yet were more angry about the loss of life caused by the bombing than the political message. How did this issue go from openly contestable forty-five years ago to verboten in the present day?

Unfortunately Kim Mi-rye never really tries to get into these questions, instead focusing on the fairly narrow historical scope of how the terrorist attacks were seen at the time. While there's nothing wrong with this approach it's surprisingly dry, and even mundane when contrasted with the often lackadaisical reactions given by the various interviewees. This is perhaps part of the point. No one has much to say about the Armed Front because it was a lifetime ago.

Still, it's easy to see how people could be encouraged by their ambivalent example. Because if nothing else, the Armed Front believed in the here and now. They didn't bother themselves with waiting until the right moment. They just acted. Even if they failed in most of their objectives, even if they express doubt in the present day, these people stood for something. They believed in a higher justice that was not defined by the abstract concept of Japan. That may not have been much but it was better than nothing.