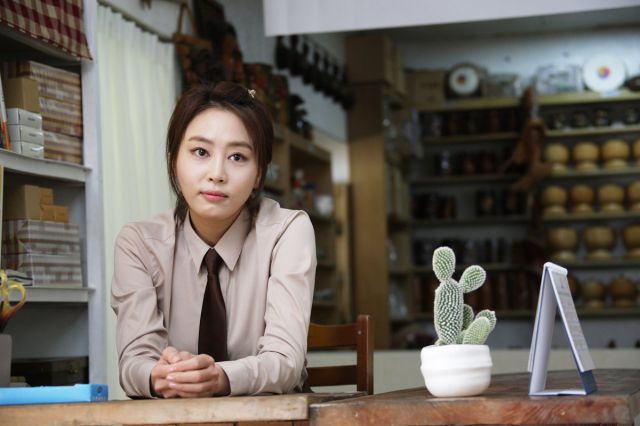 Soo-ha (played by Kang Ye-won) is a grumpy woman who inherits an obscure rural road stop that has trouble attracting customers. The location is bad, the food is bad, and Soo-ha doesn't even particularly want to be there but who would want to buy this kind of property? Lacking any other ideas, Soo-ha eventually decides to grant temporary residence to the Ecuadoran band Kawsay, who apparently wander the South Korean peninsula looking for food and lodging while offering only their traditional Ecuadoran wisdom in return.

The basic concept of "El Condor Pasa - 2014" is its most baffling and intriguing quality. Apparently Kawsay is an actual real band that may well still be wandering South Korea to this day (their last blog entry was in April). I've seen plenty of strange sights in South Korea, but a traveling Ecuadoran band is a novelty quite beyond anything I've ever encountered. I especially have no idea how or why they got involved in the production of an independent Korean anti-road film.

Because that's what "El Condor Pasa - 2014" is in totality. It's one of those odd locations the main characters run into in road movies, and the movie explains how this place came to be. In more traditional narrative terms, it's the story of how Soo-ha stops being go grumpy and obsessed with the "right" way to do things, instead admitting that life is a bit like a flowing river. Problems need to be dealt with as they come, with whatever resources are immediately available.

As narrative arcs go this isn't exactly a strong one, which I thought was appropriate. Kawsay doesn't really solve all that many problems right away, since they're not magical Ecuadorans. The first time anyone gets a taste of Ecuadoran cooking ends up dovetailing with an accidental tragedy that is only somewhat mitigated by a rather lovely painted mural. Kawsay's Ecuadoran music is also annoying more than it is inspiring right away, since Soo-ha is not often in the mood for noise.

But they always keep at it. Kawsay changes the people they meet for the better mostly by just trying to maintain a positive attitude in the face of absurdity. Even when there's not a single audience member at the road stop, a band member can whip out an ocarina and play out a plaintive tune solely for the sake of personal enjoyment and satisfaction. There's a sort of zen quality in that, being able to enjoy music just for the fun of it even when doing so makes a person look utterly foolish.

This sentiment works to give "El Condor Pasa - 2014" a generally soft, breezy quality. It's less a film intended to be consumed for complicated dissect and more a sort of break time, a reminder that worrying about whether everything will "work out" in the long run tends to be fretting over nothing. Maybe it will, maybe it won't. But hey, for tonight at least, if you have a roof over your head with people you care about. That's something, right?

"El Condor Pasa - 2014" is directed by Song Jae-yong and features Kang Ye-won and the Kawsay Band.