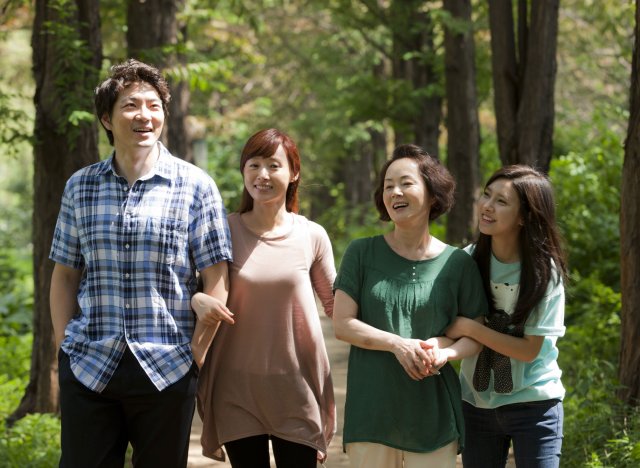 Soon-im (played by Kim Young-ae) is an older woman living with her daughter Yeong-hee (played by Do Ji-won), her son-in-law Sang-ho (played by Song Il-gook), and her high school daughter Flora (played by Kim So-eun). Their lifestyle under one roof in a big house located in the middle of nowhere is mostly functional- not entirely warm but not particularly hostile either. Then a series of unfortunate calamities takes its toll on the household testing everyone's sanity, with Soon-im bearing the brunt of the emotional whiplash.

On one end "Entangled" is unavoidably sadistic. The movie wallows in its own misery, with escalation seeming inevitable from the very first scene with its depiction of Soon-im in the midst of horrific wailing. The degradation of Soon-im's mental state naturally serves to amplify the misery. As the destructive familial influences begin to evolve I got the impression that writer/director Lee Don-ku wasn't wallowing in misery for its own sake but rather trying to depict the nightmare of getting old.

Becasue Lee Don-ku is so young himself this vision is less one that's informed by actual experience and more by the fears a young person might have about their inevitable later years. Soon-im is not exactly a strong matriarchal presence in her family. Her daughters regard Lee Don-ku with some emotional distance in spite of their close living proximity. Sang-ho is actually the most filial of the younger characters- but then he treats all the women of the house with respect. There's no sense of victory in the familial arrangement even though they all appear to live fairly comfortably.

So when Soon-im starts to lose control of herself, first physically and then mentally, we can see her whole sense of purpose begin to crumble. Soon-im feels like a failure who doesn't deserve love, and whose well-meaning outbursts just further aggravate her family members. The constant sense of guilt, and obvious foreboding feeling that imminent doom is unescapable, permeate all of "Entangled" and is the obvious motivation behind the movie's title. Soon-im has become trapped rather perversely by trying too hard to escape.

Of course, the actual enfeebling of old age is a more gradual process. Which is why I suspect the horror elements of "Entangled" might be lost on viewers who try to think of the movie too realistically, rather than in genre terms. The crude style of "Entangled" is highly reminiscent of Lee Don-ku's previous movie "Fatal", but doesn't work to quite as good an effect because "Fatal" is, principally, a fairly unsubtle morality play.

In "Entangled", by contrast, no one can really learn anything because the lead character has no real agency and the other ones are entirely reactive. Scenes like one that involve some brutal schoolyard bullying are tense but pointless, because the purpose of these moments is to demonstrate what neither Soon-im nor the characters around her can control. Such a depiction is certainly haunting but it's neither dynamic nor dramatic. Consequently, "Entangled" requires a pretty specific state of mind in order to get much out of it.