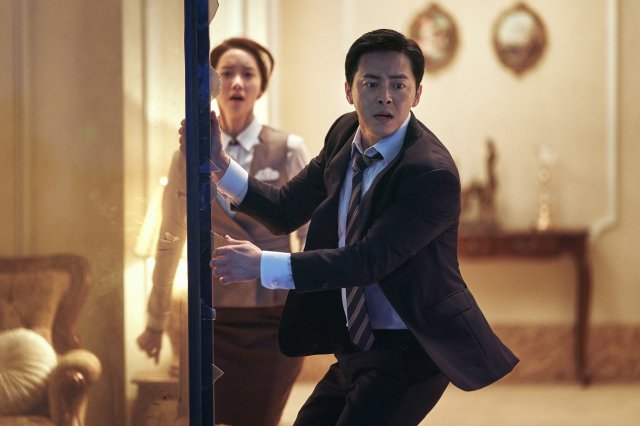 The main stand-out quality to "Exit - Movie" is, weirdly enough, how quintessentially Korean it is. The ethnic overtones aren't super obvious. I mean sure, Yong-nam (played by Cho Jung-seok) is introduced working out at a playground- a ridiculous endeavor, but South Korean playgrounds have high quality exercise equipment. His sister first appears bugging her mom late at night for kimchi. And a ridiculous amount of action takes place at a traditional ceremony party venue.

"Exit - Movie" is a bit of a paradox. Overly specific references like this are harder for an international audience to get, and in theory should decrease the movie's marketability. But in practice, these references give the movie a dark comedic edge, and make the characters surprisingly relatable down to the tiniest detail. What's not to love about the bickering family reunion? Or the supremely awkward position party manager Eui-joo (played by Yoona) is in? Sexual harassment is no fun at all.

Consequently, long before the big gas cloud shows up that actually turns "Exit - Movie" into a disaster flick, we have a surprisingly charming film here that threatens to turn into a romantic comedy except that we're all probably familiar with how it's been marketed. Once that transition finally happens, though, writer/director Lee Sang-geun treats us to an even more intriguing idea- Yong-nam and Eui-joo are forced into solving a series of increasingly ridiculous and mundane architectural problems because the gas just keeps gloing up, up, up.

Like seriously, does anyone else really hate random locked doors? You want to leave a building a non-standard direction and bam, locked doors for no reason? An outrageously large part of the conflict in "Exit - Movie" is just about the protagonists trying to solve the problem of random locked doors. It's simultaneously hilarious and terrifying, because it's worrisome to consider how many real world safety regulations would only be of ambiguous usefulness in an actual crisis situation.

Then there's all the badass real-life application of the normally obscure skill of rock climbing. "Exit - Movie" shoves its characters into a situation where they're stuck trying to get to higher ground with whatever random tools happen to be available- and most of the time, there's not much to go on. You ever see those random bumps in a building that are only there because the architect thought they would look cool? Imagine having to use them as actual support to avoid suffocating to death.

"Exit - Movie" is loaded with great imagery like this, the humor intensified if you know what it's referencing. That dumb giant crab was another standout I particularly liked. Although really, "Exit - Movie" is so well-constructed you don't actually need to know any of this stuff. This is a movie that really fundamentally gets how disaster movies aren't about the spectacle or the tacked on romance or the backstory, but all the delightful problem solving. That the big character moments are all actually funny, instead of heavy handed foreshadowing, is just icing on the already very delicious cake.