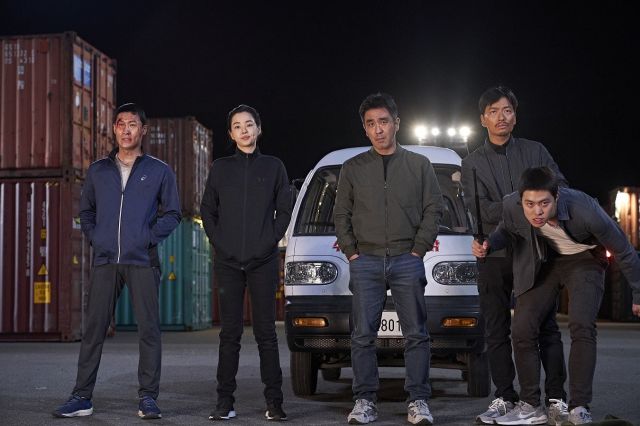 It becomes very clear very quickly in "Extreme Job" that the five cop team the movie is centered around is really not very competent. After making excuses to the suspect as to why they didn't make a better entrance, they immediately tip him off to possible escape routes and bungle further capture attempts. When Chief Go (played by Ryu Seung-ryong) finally comes up with an obvious plan, that goes wrong too and the case is "saved" by an embarrassing plot contrivance.

This is basically the only joke "Extreme Job" has, and it gets repeated a lot. Credit given where it's due, that joke is way funnier than it has any right to be because the cops keep finding new complicated ways to screw things up. They can't even do a simple surveillance operation without attracting undue attention. By sheer dumb luck they'll hit a major lead, and then not have a clue how to follow it up. Sometimes they even manage to fail by succeeding too hard.

It takes a surprisingly long time for "Extreme Job" to get to the fake fried chicken restaurant considering it's the whole hook of the movie. The reason for that is, the plot hook is a dumb contrivance. It's a bad idea even in context, and is pointed out as such at the time. The fried chicken restaurant storyline mostly impedes the movie's actual plot, to the point that I was seriously wondering for awhile whether the cops were just going to turn in their badges and admit that they're better entrepreneurs.

We know that can't happen, of course, because the villains are these evil drug runners, or something. I couldn't really keep track of the various relationships between gangs but I did chuckle during the montage sequences where we saw gangsters running fried chicken restaurants and- well, see, that's my point. "Extreme Job" doesn't really care how it gets from one scene to another. Each individual scene is just a scenario for further jokes.

Continuity in the story is lacking. I counted exactly three lines of dialog that were somehow supposed to lead to a full romantic subplot. Continuity in the humor is surprisingly consistent. There are frequent callbacks to previous jokes- the best one probably being the school bus. Then there is of course the lingering question of whether the main characters are competent at anything whatsoever, a mystery that is only solved at the climax.

"Extreme Job" is less than the sum of its parts. I could pick out nearly any individual seven minute stretch of this movie and find some fairly brilliant gags. The problem is, add seven minutes to seven minutes to seven minutes and then...it all gets to be a little tiring. The movie takes itself pretty far on earnestness and solid comedic performances alone, but in my mind at least, a movie needs more than that to be a real comedy classic. Maybe you're not so picky though. Maybe you just want to laugh. In which case, "Extreme Job" should get the job done.