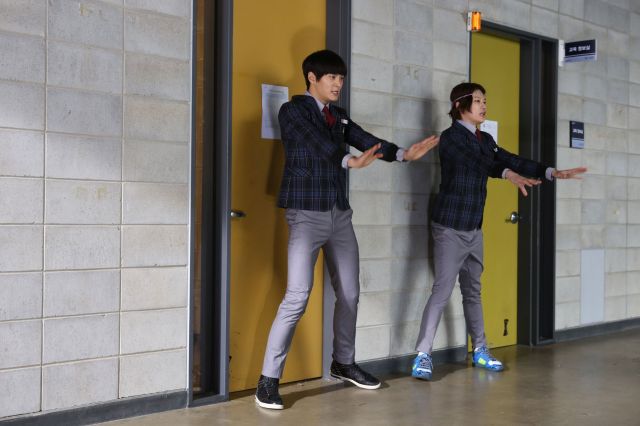 Gi-myeong (played by Joo Won) becomes determined to excel in fashion either to humiliate the bullies who torment him / win the affections of the girl he likes / just out of sheer love for fashion. "Fashion King - Movie" is never particularly clear about which specific motivation is actually important to Gi-myeong, and all of them are pretty underdeveloped. But that's not what the movie is about anyway. The premise of "Fashion King - Movie" is mostly just an excuse to show off increasingly elaborate and bizarre fashion setpieces, which are more about provoking reaction shots and color commentary than they are anything actually resembling a coherent point.

Based on a webtoon, "Fashion King - Movie" demonstrates a lot of fidelity to the comic format. This isn't necessarily a good thing. Weird spectacle can get a lot of good play when it's just one giant burst that you're reading while going home on the subway, but as designed the movie constantly lurches. There's little in the way of personal development- most of the named characters get no serious exposition at all outside of the bright introductory titles that boldly announce the appearance of a new fashion trend, complete with bright colors, beatbox sound effects, and strange exotic English.

Roughly half the movie can be summarized by that weird general emphasis on style. And I have to admit, on spectacle "Fashion King - Movie" has a lot going for it. In one particularly memorable battle our lead and villain go head-to-head in a fashion walk. A harsh breeze wafts in, destroying one combatant and moonwalking the other into the high sky. If you've actually watched the scene in question that sentence will seem slightly more coherent.

The other half, though...well, it's pretty bad. There's an attempt to work Gi-myeong's quest to become fashion king with his pitiful bullied past, and one character in particular exists solely to dish out excessive violence every few scenes. These parts of the movie aren't at all wacky and fun. Consequently, the tonal dissonance is just awful. Fashion battles and fistfights just don't go hand-in-hand.

It's not just a matter of taste, either. From a story perspective these parts of the movie differ so wildly as to ruin the internal logic. The fashion showdowns make absolutely no sense except in a fantasy context. The fights and the bullying, by contrast, are used to drive serious conflict. The pitiful attempts at inserting heavy emotion in the story only serve as a reminder that "Fashion King - Movie" is at its best by far when it just gives up any pretension of coherence and throws as much ridiculous fashion up on screen as possible.

There's other technical problems, like in the sound direction. But in the end, director Oh Ki-hwan pretty clearly had one goal in mind for "Fashion King - Movie"- ridiculous, self-referential, cameo-ridden music videos structured like sportscast commentary. If that sounds like something you want to watch, have at it. If not...well, honestly, the fast forward button exists for a reason. Just skip past the bad parts and enjoy the scenes with all the pretty colors instead.