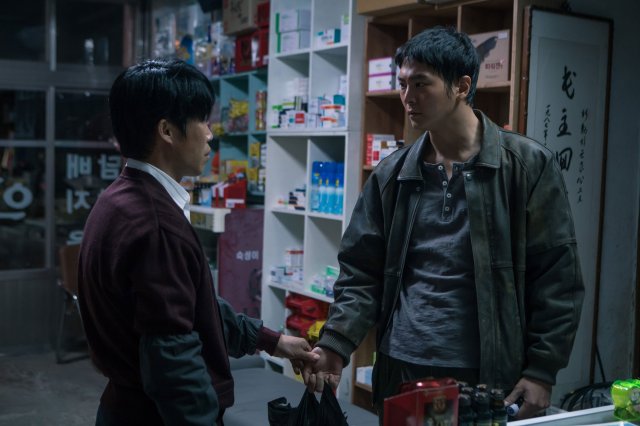 Jang-woo (played by Joo Won) and his younger sister Eun-ji (played by Ryu Hye-young) are drifters who wander about the southeastern region of South Korea in search of work. Jang-woo tends to self-sabotage these efforts either by being overly protective of Eun-ji or overly paranoid of the locals and more typically a combination of both. Then they meet Si-eun (played by Lee Yoo-young), a woman who possesses supernatural predictive powers and the unfortunate destiny that implies.

"Fatal Intuition" is at its best when the movie is a travelogue of the slowly deterioriating small town atmosphere in southeastern Korea. The moody tone of the first act is highly reminiscent of classic Korean films, where men and women without homes amble about from place to place in a dreamlike state, their very ambivalence a commentary on the rapid change present in South Korean society. The tone is dark without being especially morbid, which is a nice balance to set.

Alas, the tone does go tone for the morbid when a serial killer is introduced. That was a pretty big disappointment. It felt like director Yoon Joon-hyeong didn't have enough confidence in the atmosphere to communicate the story so he resorted to increasingly clunky information dumps to make the plot too obvious. Si-eun's supernatural powers are nowhere near as important to the story as you'd think and a better script would have made it ambiguous whether she even had any supernatural powers at all.

But far more than the plot, the main draws to "Fatal Intuition" are the broken landscapes, the needless bullying, the sheer scarceness of people in any given scene. Between Jang-woo and Eun-ji we can actually even see competing ideals of pessimism and optimism. Even as we are obviously led to believe that Jang-woo's interpretation is correct, Eun-ji's still comes off as sympathetic and reasonable. Indeed, it's highly thematically appropriate that Jang-woo's pessimism is what directly creates the main crisis in the story. His assumptions were right- but his actions were wrong.

"Fatal Intuition" also benefits from great casting, although much of it is accidental. We know now, for example, that Oh Dal-soo is not as harmless as he looks. This lends a creepy convincing air to his character that really lets us see him the same way that Jang-woo does- with mostly unjustified paranoia. "Fatal Intuition" is at its best when it encourages us to stop thinking rationally because all of the lead characters here act by gut instinct rather than logic.

Which incidentally, is what makes the final portion of the story after the serial killer's identity is unveiled such a chore to get through. The enigmatic air of mystery is what gives "Fatal Intuition" its main sense of intrigue. Once the story got to the police station I kept expecting another twist to be forthcoming but instead all i got was some fairly mundane backstory that was neither relevant nor interesting to the murder mystery. The ending was also underwhelming, relying as it did on a character relationship we had only ever seen in crisis.

Available on DVD from YESASIA and streaming from Amazon