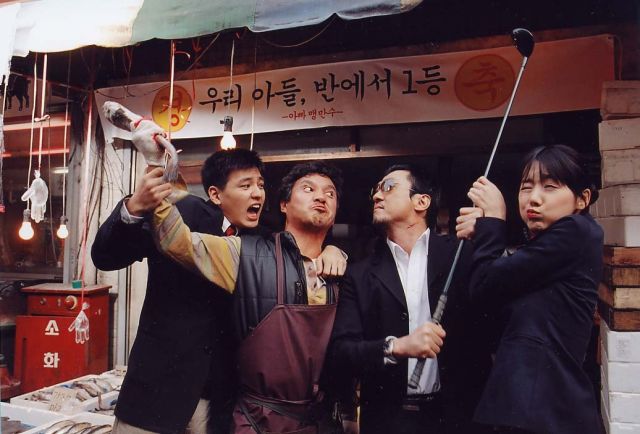 In the cutthroat world of South Korean education, success goes to those who can score an apartment in a gentrified area with good schools. So it is with fishmonger Man-soo (played by Cho Jae-hyun), who following the story of Mencius, drags his son Sa-seong (played by Lee In-I) to Seoul in the hopes of getting him a better education. Alas, Sa-seong would rather just sing songs and hang out with local bad girl Hyeon-jeong (played by So Yi-hyun), whose own father figure Kang-doo (played by Son Chang-min) brought her to Seoul with the same gambit in mind.

...Oh how I wish this movie was about the kids, rather than their idiot parents. Because most of what happens in "Father And Son : The Story Of Mencius" is that Man-soo and Kang-doo fight. A lot. You'd think this would be pretty one-sided, since Kang-doo has an entire gang of criminal ne'er-do-wells under his command and Man-soo just sells fish but no, somehow they manage to spend the entire movie fighting over nothing.

I'm serious. I got the whole part about how they want to give their kids a good high school education, and how said kids are in the same class and thus competing against each other. But I could never figure out how this led to their parents fighting just because they live in the same apartment building. It beggars disbelief that after a certain point the apartment manager wouldn't just call the cops and kick them both out for being loud and obnoxious to such an extent that it constitutes harassment of everyone else in the building.

They're being upset that Sa-seong and Hyeon-jeong are spending time with each other rather than studying might have been sufficient inducement except that Man-soo and Kang-doo don't even realize this is happening until very late in the movie. It doesn't change their behavior in any case. There's also an entire subplot going on in the background of how Sa-seong would rather sing than study but this is left largely unexplored.

As a comedy it's not generally fair to attack "Father And Son : The Story Of Mencius" on continuity issues. But I do so anyway because on top of everything else the movie just isn't funny. We're watching these horrible people do genuinely awful things to each other up to the point of attempted murder with little to no self-awareness that what they're doing is wrong. I was grateful when a vomit joke showed up just because it demonstrated a basic understanding of how comeuppance comedy is supposed to work.

Father And Son : The Story Of Mencius DVD