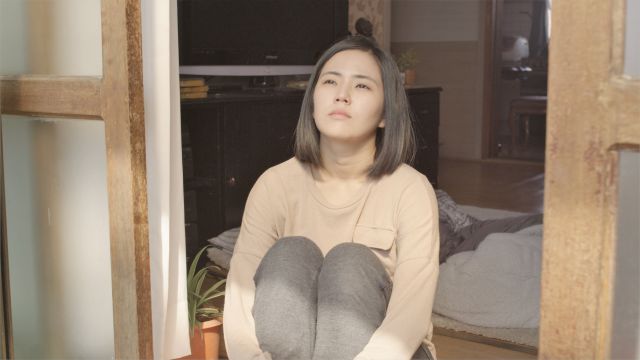 In the opening scene of "February" we see the twenty-something Min-kyeong (played by Jo Min-kyung) take abuse from her boss at the dumpling shop until finally, she can take no more and storms out. Min-kyeong's assertiveness in this scene is admirable. But as character study, "February" is soon in ominous territory. Sure, Min-kyeong's situation is sympathetic. We see her taking classes and engaging in light prostitution to make ends meet. Then we see how Min-kyeong treats her alleged friends and family.

The movie's title, "February", was poorly chosen. It makes the film nearly impossible to search for. Metaphorically it's pretty apt though. "February" takes place during that dark month, where logically we know that spring and its attendant hope is around the corner, yet in the short term, life remains unbearably cold. Min-kyeong uses an unheated storage unit for her prostitution side gig, and is forced to spend more time there than she would like as better options dwindle out of reach.

Min-kyeong's main problem is that she's sneaky and devious- but nowhere near as smart as she thinks. When Min-kyeong stumbles into a good situation for the first half of the movie, she ruins it by trying to drive a wedge between people for no good reason. The whole trip to the pharmacy in particular is unsettling because it's not clear what Min-kyeong was trying to accomplish. But in any case Min-kyeong bears far more of the brunt and blame for the situation than she was expecting.

Succor in the second half is wrecked much more straightforwardly. After a strangely optimistic sequence wherein Min-kyeong befriends a young boy named Seong-hoon (played by Park Si-wan), Min-kyeong impulsively engages in self-sabotage. In the rather forgiving haze that follows, we then find out that Min-kyeong's new living situation wasn't ever really sustainable in the first place. What's worse, Min-kyeong closes out the chapter of her life by making some abominably vile statements.

Though vile, everything Min-kyeong says is true. Indeed, what makes her statements so deeply unsettling is that Min-kyeong appears to be talking from direct experience. "February" forces us to empathize with Min-kyeong's fundamentally pessimistic worldview without ever justifying it. The effect is fairly brutal. Sure, it seems like life would be easier for Min-kyeong if she was nicer. But the fact is, when Min-kyeong is being nice, she's just pretending. Min-kyeong is a naturally bitter person who just doesn't like other people that much, or even herself.

That's the context with which "February" arrives at its weirdly magical ending, where the withdrawn Min-kyeong is left staring in wide-eyed wonder at the panoramic beauty of the delapidated landscape where she lives. She seems, as much as anything else, mostly just very relieved to learn that there is some greater meaning to life than just trying to scrape together whatever pocket change is necessary to maybe one day get a real job and have some greater ambition than misanthropy. There's not much to like about "February" but it's far more relatable than I'd like to admit.