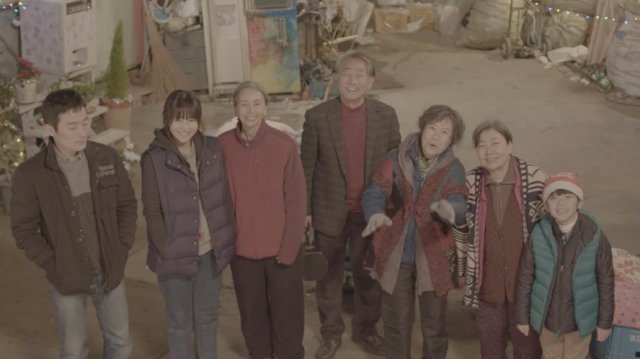 Cheon-ji (played by Lee Young-ah) is a perpetually cranky and overworked civil servant who works in a district populated largely by poor old people. Don't let the descriptor "poor" fool you, as these old people are lively and a big reason why Cheon-ji is exhausted is because she has to break up their fights even as the single mom works to dole out their charity. So naturally, Cheon-ji has little patience for Ji-hoon (played by Park Sung-il), a man who claims to be a reporter but Cheon-ji's used to dealing with lowlifes.

It was with some irritation that I noticed Cheon-ji drifting out of focus as "Finding Angel" went on, with the movie ultimately settling on Ji-hoon as the main character. It's not that Ji-hoon's a bad character. The guy's actually a pretty charming mix of roguish, untrustworthy, yet generally well-meaning. It's just that they work best as foils to bounce off of each other, with great chemistry that really sets off the main exciting conflict- why does Ji-hoon care so much about this dumb charity story?

Oh right, the plot. Ji-hoon came to Cheon-ji's neighborhood to try and find out more about a generous anonymous donation that takes place every year. The titular angel, so to speak, who provides the impoverished residents with some financial security. It's a mystery that's only really interesting to the extent that Ji-hoon keeps ineptly failing at even coming close to figuring out the source of the money, instead having comic misadventures where he instead uncovers the solution to some other ridiculous subplot that's not even a real mystery.

"Finding Angel" shines brightest when it's in full-on screwball comedy mode, which it does for maybe about...a fourth of its runtime. Which of the four credited screenwriters were responsible for this element I have no idea but I really wished they'd just written the whole thing. The little vignettes are the best part of "Finding Angel". Take Cheon-ji getting into a fight with some wannabe benefactor who just wants a photo-op, or Ji-hoon helping Cheon-ji's son outwit some neighborhood bullies.

But later setpieces vary in quality. One that just made me feel uncomfortable was the introduction of a criminal couple where the man frequently engages in violence with the woman. Which she might be interpreting as foreplay, it's kind of unclear, although he just seems to be a jerk. That whole plot point doesn't go anywhere, and the climax in particular also feels pointless, with the sudden appearance of characters whose whole existence undermines the convoluted joke of Ji-hoon's cover story.

For the most part "Finding Angel" is pretty pleasant, with its charming feel good character interactions going a long way in terms of masking the fairly thin plot. Purportedly "Finding Angel" is actually based on a real-life neighborhood that does indeed receive large anonymous donations. That's really just a hook for the friends we meet along the way and yes, as incredibly cheesy as that sentiment may be, this is the kind of movie you want with cheese.