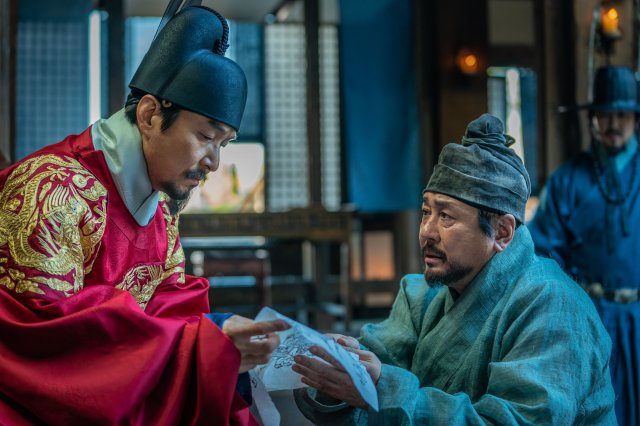 As "Forbidden Dream" opens we see the legendary King Sejong (played by Han Suk-kyu) being carried around in his palanquin through a serious rainstorm. The human drawn carriage completely falls apart apart to the wailing of his loyal retainers. We then see the equally legendary court inventor Jang Yeong-sil (played by Choi Min-sik) stubbornly bracing for his fate as the obvious scapegoat to the incident. Then "Forbidden Dream" flashes back to when these two men first met.

The astonishingly good chemistry between Han Suk-kyu and Choi Min-sik in these scenes is where "Forbidden Dream" is at its strongest. Though the two men are from wildly different upbringings and are thus held in radically contrasted esteems by their various co-workers, they bond over their sense of mutual curiousity. Jang Yeong-sil is always coming up with ideas for wacky gadgets, and King Sejong is astonished by the natural wonders Jang Yeong-sil reveals to him.

These scenes have a gentle easygoing sense of humor. Take Jang Yeong-sil explaining that he can't perfectly replicate one sketch since no elephants are available, or his willingness to answer obviously rhetorical statements posed by King Sejong where it comes to riddles like being able to observe the night sky without the night. King Sejong loves Jang Yeong-sil's fearless nerdiness, as Jang Yeong-sil will babble on at length on just about any complex scientific subject.

Jang Yeong-sil's comparative ignorance in the realm of politics predictably leads to the tragedy alluded to at the start of the movie. Well, predictable in the dramatic sense. While "Forbidden Dream" is beautiful as a brotherly love story about the two greatest men of an era, too much much of the screentime gets bogged down in arcane politics and statecraft. Although the bigger surprise is how many of these scenes don't really directly involve King Sejong or Jang Yeong-sil at all. They're just presented as bystanders with limited power to react to events beyond their control.

The narrative arc is logical, and probably a decent approximation of what actually happened to the real Jang Yeong-sil. The problem is that none of this is particularly interesting or relevant to the bromantic chemistry between Han Suk-kyu and Choi Min-sik. Jang Yeong-sil not really understanding politics is such an important thematic plot point it's really weird that director Heo Jin-ho is just intrinsically expecting us to be able to follow along.

The more mundane constructional issue with "Forbidden Dream" is that the movie contains entirely too much unnecessary brooding, usually on the part of uninteresting characters who aren't King Sejong and Jang Yeong-sil. The supporting cast is fairly one-dimensional with little apparent motivation beyond petty spite. Yet somehow, they loom large and disproportionately dominate the film's screentime. This leaves "Forbidden Dream" in the awkward place of having some extraordinarily strong high points even though at over two hours the story drags and is just plain boring. Still, the parts that I can remember clearly shine all the more brightly in memory.