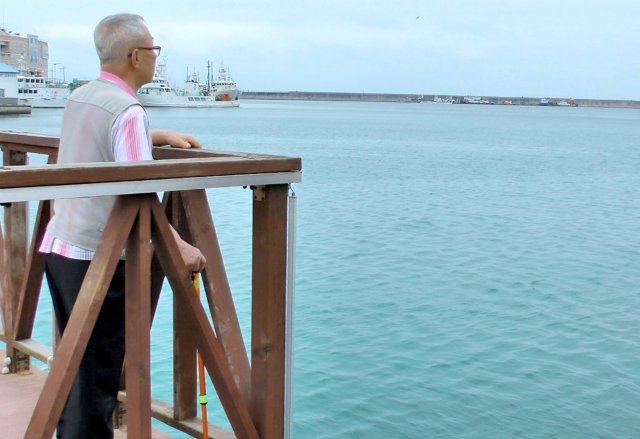 The father of director Kim Lyang hails from the seaside town of Dancheon in the Hamgyeong province of North Korea. Back then, of course, it wasn't North Korea, it was just Korea. He ended up on the wrong side of the demilitarized zone through the time and tide of war. In "Forbidden Fatherland", we see Kim Lyang observing her father's meek depression. From staged flashbacks where Kim Lyang is portrayed as a child who resents her father, the documentary transitions to asking what made him this way.

The subject matter of "Forbidden Fatherland" is extremely similar to "My Father's E-mails" from a few years back. Both documentaries go over a father figure isolated from his hometown, and the mental issues this evoked in his family life. Yet the tone between the two movies is markedly different. Where "My Father's E-mails" was more of a biographical film, going over the title's character life story, "Forbidden Fatherland" is much more fleeting when it comes to the subject of Kim Lyang's own vocational history.

That's because ultimately "Forbidden Fatherland" is less about Kim Lyang's father and more about the cultural milleu within which he's survived over the past several decades. Kim Lyang pieces together old footage of South Korean educational material, propaganda, and even cartoons, all dedicated to making North Koreans out to be these devilishly monstrous and evil figures. Kim Lyang's father was exposed to a lot of this, and it did a huge number on his self-esteem, to the point he became reluctant to talk about his hometown at all.

"Forbidden Fatherland" is the beneficiary of bizarre timing. While Kim Lyang got the funding necessary to finish the film in anticipation of normalizing relations between North Korea and South Korea, now that the documentary is finally complete, that project is once again on a downswing. It's discouraging and even a little enraging to get to the ending, with Kim Lyang's father tentatively expressing hope of maybe going on a roadtrip to North Korea before he died, knowing how the reunification project never even made it to that level of planning.

Yet it's hard to begrudge Kim Lyang's father any level of minor hope. As the historiography gets into the eighties, and we see a heretofore unfathomable level of warming relations between North and South Korea, we see how even that wasn't enough to fully smooth over the emotional scars Kim Lyang's father had already endured. He comes off throughout the whole documentary as a strange, sad little man, who really just wanted someone to commiserate with.

Him and the other North Korean refugees spotlighted here make for a very different portrait of the defector mindset than the one we're used to. They don't think much about politics, yet the entire trajectory of their lives was ineffably decided by larger forces quite beyond their control. While Kim Lyang's father was a tragic figure, the truly sad part about that is how his life didn't need to go that way, and neither did anyone else's.