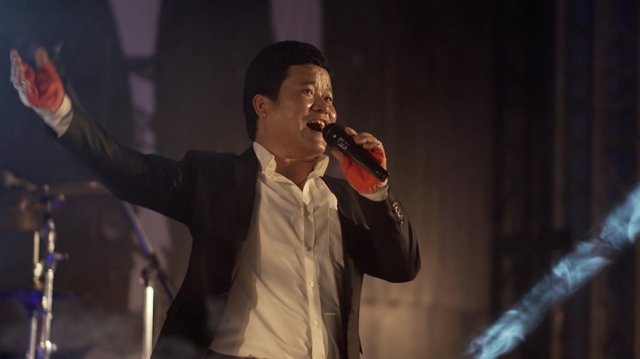 The Seoul Olympics in 1988 dramatically altered the perception of South Korea worldwide, the event symbolizing the country's development. But a major internal change also took place due to the games that was unseen by wealthy outsiders. The South Korean government imported a lot of cheap labor from poorer countries to complete its Olympic facilities. Not all of them returned. One, a Nepalese man named Minu, became an advocate for his people in South Korea.

Director Jee Hye-won sprinkles "Free Minu" with just enough documentarian context to explain why Minu existed. He was a passionate musician and labor activist with a distinctive voice, his casually fluent Korean melding Korean intonation with his own native Nepalese tone. One distinctive scene that shows Minu just casually chatting with older Korean hikers back in Nepal demonstrates surprising reverence and deference. Minu's an easy guy to get along with.

This makes historical footage featuring a dynamic, defiant Minu rocking out fusion music and demanding civil rights for migrant workers all the more shocking. Framed in the present day Minu is a reasonable, charming man. So too do the demands of the migrant worker labor movements of the early 2000's seem equally reasonable. They even adapt the traditional South Korean labor protest style of marching and headbands. Their subtle cultural awareness makes their apparent Korean cultural identity unassailable in spite of their skin color.

"Free Minu" is a fascinating study of Minu and people like him. Minu is undeniably Nepalese yet he also clearly thinks of himself as being Korean. He is heartbroken upon being exiled from South Korea and his funeral even shows him as being draped in a South Korean flag. Minu died roughly a month after "Free Minu" premiered at the DMZ Docs International Film Festival. Which is oddly poetic, since one of Minu's great desires was to return to Korea however briefly, and the DMZ Docs International Film Festival gave him three days.

But while technically a eulogy for Minu in practice "Free Minu" is more a celebration of his life. As a younger man we see Minu's passion and determination alongside those of his fellow migrant workers. We see his quieter ambitions in the present day, teaching the next generation of Nepalese migrant workers the basics of Korean language and culture. We even see him work to build a South Korean style coffee shop.

Yet permanence remains elusive. A semi-intellectual group conversation late in the documentary questions the usefulness of the migrant philosophy. When young Nepalese people leave Nepal, they take a tiny piece of the country's future with them. Can Nepal ever really develop, when so much of its economy is reliant on exporting migrants? Minu's very existence has been more a boon for South Korea than it was for Nepal, not that he got much appreciation in return. These are difficult, profound issues. Expecting Minu to be able to answer them may be a bit much. All we can really do is remember who he was.