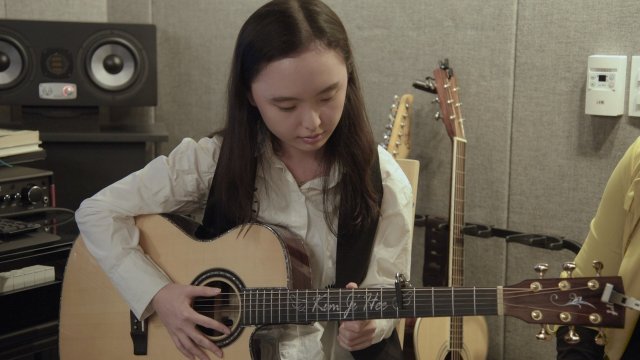 People in the media in general tend to be loud and outspoken, but we all know that introverted people do indeed exist. "Free My Soul, Free My Song" is an interesting documentary because it's about a very introverted, very shy young woman who would normally never be the topic of a feature length. On the face of it there's nothing all that remarkable about Ji-hee's quest to become a world class acoustic guitar player- save for the fact that she is mentally challenged.

This factoid is less important to the documentary than you'd expect, but it's also highly appropriate because Ji-hee's parents, for all their obvious love for her, are also constantly viewing her through this lens. They have been very encouraging of Ji-hee's passion for acoustic guitar, and are proud of her accomplishments as a musician, but they constantly think in terms of her limitations. Their praise for Ji-hee is tempered by the belief that her disability limits her.

It's fascinating watching this attitude unfold in front of the camera because we as objective viewers can quite plainly see that Ji-hee is exceptional without qualification. For the first several minutes there's no hint of Ji-hee being mentally disabled because she is one with the guitar. It's little surprise that she wins a broad spectrum performance competition for mentally disabled people because Ji-hee is easily talented enough that she could busk for money on the street.

A failure to follow up that performance creates unrealistic expectations both for Ji-hee's parents as well as herself. So it's gratifying when their journey takes them to a new, very serious acoustic guitar teacher in Seoul who is a bit perplexed to find Ji-hee at a significant level of mastery. Later meetings with neurotypical musically interested peers show that Ji-hee is treated with respect everywhere she goes just on her own merits as a musician- not out of mere pity.

There's no real ending to "Free My Soul, Free My Song" because it's less about accomplishments and more about coming to peace with what we can't do. It's impossible to say whether Ji-hee has been limited in her acoustic guitar talent by her mental disability but more importantly, it really doesn't matter whether she is or not. As her mother says near the end, what matters is that Ji-hee is happy playing music and being in a community with people who understand and appreciate that passion.

I was also impressed with how we also get some pretty good exposition about what acoustic guitar music is like and why Ji-hee is so passionate about it. An early scene that takes place at a serious competition, wherein we get to see the advanced techniques of several genuine local virtuosos in the art, is excellent. So is the cute story about how Ji-hee became so interested in acoustic guitar in the first place. In the end "Free My Soul, Free My Song" is really just the story of a young woman and her passionate offbeat hobby- and that was more than enough for me.