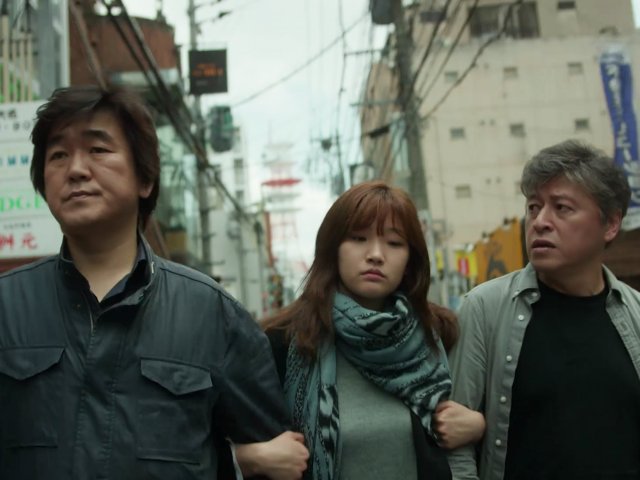 We are introduced to bookstore owner Je-moon (played by Yoon Je-moon) as he is being annoyed by So-dam (played by Park So-dam), who's wearing a school uniform in spite of not being a student. So-dam is a queer young woman, and Je-moon mistakes her peculiar behavior for flirting. The situation gets weirder than that as So-dam eventually talks him into going to the titular "Fukuoka" and by apparent coincidence they run into Je-moon's old friend Hae-hyo (played by Kwon Hae-hyo) at a bar.

The first part that really stands out about "Fukuoka" is just how excellently cast everyone is. Yoon Je-moon and Kwon Hae-hyo not only look similar, they have similarly abrasive personalities. It's deeply funny to think of a woman wanting to be involved with them both romantically at the same time, as neither are especially pleasant or interesting. It would seem that there's just no accounting for personal taste.

Which indeed, is also the only way to make sense of So-dam wanting to spend so much time with two men who are both old enough to be her father. So-dam is a deliberate enigma throughout the film. Peculiar character aspects such as her odd competence with languages, her peculiar relationship with the doll, and just the spooky stuff that happens around her in general just goes uncommented upon and unexplained.

I mean this more from the perspective of the relatively uncurious Je-moon and Hae-hyo than us as viewers. While writer/director Zhang Lu deliberately stokes these mysteries, his actual characters persist in the dreamlike world that can only really be described as existing in a foreign country. Yes, "Fukuoka" is literally foreign, in that it is Japan, but there's a certain sort of detachment that comes from guys like Hae-hyo. For him "Fukuoka" is less a specific place as it is a state of mind.

Observe, for example, how Hae-hyo runs a Western style bar. Then, when Hae-hyo's attitude has softened a little and he's showing Je-moon and So-dam around, where should Hae-hyo take them but to another Western style bar? Allegedly these characters are on vacation yet all they do is wander around "Fukuoka" at random. Je-moon and Hae-hyo are getting old. They've accepted this, and seem to resent each other mainly for serving as a reminder that they used to be young.

There's something deeply personal in the way this backdrop is simultaneously alienating yet also kind of serene. There's no way of disassociating this from writer/director Zhang Lu's own legend of being a Chinese transplant to the Korean peninsula. "Fukuoka" feels like such a culmination of a lifetime of detached experience I'm tempted to call the movie his masterwork. Elements that could seem obnoxiously subtle in prior films are very much out in the open here.

But perhaps the best way to grasp "Fukuoka" is to just make careful note of the big spotlighted scene from the trailers where So-dam abruptly and seemingly inexplicably approaches Je-moon and Hae-hyo from behind and locks herself in both their arms. There is a kind of contextual explanation for this, but as Hae-hyo says, it's still out of nowhere. And as Je-moon says, it's pleasant enough.