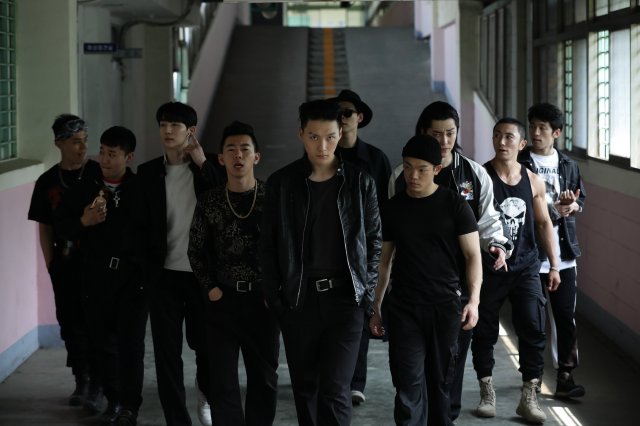 In the opening scene to "GANG" we watch Ji-hoon (played by Cha Ji-hyuk) leading a small army of high school students to a showdown with the meek-looking Chang-sik (played by Baek Jae-min), who is listening to music with his headphones. A rather misleading subtitle then tells us that we're flashing back three months to when Ji-hoon first transferred to the school. It's misleading because we never actually get back to that confrontation, and "GANG" closes right before the two start fighting.

"GANG" is just barely enough of a self-parody that this obvious continuity error appears to be intentional. The lead character is a jerk who picks fights for no reason. This is OK since apparently his new school is mostly just a front for an underground fighting tournament. The teachers are either involved in the gambling directly or just broadly acknowledge its existence the same way they would an official school sports team. In spite of the school looking very ramshackled for the most part students appear to respect their teachers and each other.

This absurd contrast is where "GANG" holds most of its appeal. The set, presumably an actual abandoned school, looks bizarre. I liked how writer/director Jo Bareun made a point of angling the camera such that short motivational phrases constantly appear in frame. The impression given is that these words of encouragement plastered all over the school have been successful in encouraging students to be polite even though their entire education is a sham.

The main exception to this is Dae-ho (played by Jo Sun-ki), who is challenged in regards to the rules of etiquette possibly because his bum eye has made it difficult for him to fully appreciate the wisdom of the motivational phrases. But before Dae-ho appears Ji-hoon has to deal with Gi-tae (played by Kim Dae-han) by doing Internet research about his fighting style and Hot Dog (played by Lee Jung-hyun-I), who draws his power from Dragon Ball talismans.

The main flaw to "GANG" is that aside from the moderately diverting jokes inherent in the character descriptions there's not really anything here that can reasonably be called depth. Note how writer/director Jo Bareun doesn't really commit to the self-conscious parody aspect of the story because he clearly enjoys filming the serious fight scenes too much. The loving slow motion detail to the one-on-one fights is ironic, considering that "GANG" acknowledges at multiple points Ji-hoon loses easily if he has to fight more than one person at a time.

"GANG" is a movie that thrives on low expectations. There's an entire sub-genre of high school gangster related films on South Korean video on demand services right now, and even the mild parody of "GANG" looks sophisticated when contrasted to those movies. But at the end of the day the target audience for "GANG" is exactly the same as those flicks- it's for people who are in the mood for some crude rude punching and don't mind if all the actors are obviously way too old to be playing high school students.