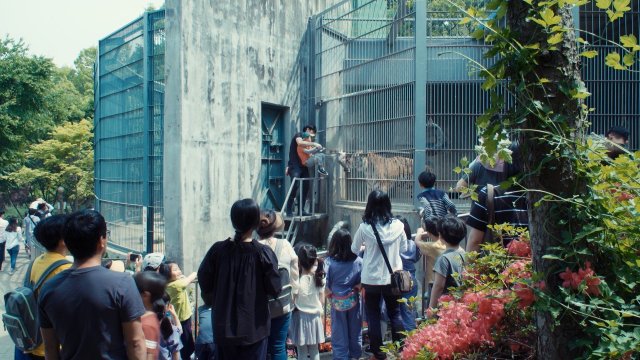 If you've ever been to a zoo you've probably seen mentions in promotional material about how beyond being just exhibition space zoos are also at the forefront of conservation issues. "Garden, Zoological" unpacks what exactly that means. The documentary was filmed over several years at the Cheongju Zoo and details the work employees go through when it comes to feeding wild animals, training them, and providing them with medical care.

A critical point made by the documentary is that in the context of a zoo the definition of a wild animal is very fuzzily defined. At any given zoo most of the animals aren't really fit to be released into a dangerous wild environment because their behavior is built around how best to survive in the zoo. Individual shots of big cats showing mild forms of intimacy with a zookeeper may be cute, but they also call attention to how in the wild such a trusting attitude may well prove to be a death sentence.

This is particularly clear with the in-depth examination of a leopard cat that has been captured and is being cared for in an enclosure far from visitor viewing areas. The cat hides in corners and constantly leaps about to avoid capture. The truly wild animal is fed wild mice to keep her from getting too used to the idea of an easy meal. Even knowing that the zookeepers' main concern for the leopard cat is her health, we can see why she lives in a state of fear when humans are around.

This tension between allowing animals a sense of self-determination and self-reliance is very much at odds with what comes most naturally to the zookeepers- an easy job. Docile animals are much easier to take care of. I particularly liked one late scene where a zookeeper is trying to weigh a sea lion, bristling in clear irritation as the creature keeps snapping at him. Eventually, with the help of a shield he grabs the sea lion by the tail as it continues to snap helplessly.

As humans it's easy for us to take so much of what we have for granted. But as it turns out higher intelligence, thumbs, and tools really do put us so far ahead of other animals as to make us functionally gods, or maybe just highly advanced aliens. I got this feeling a lot looking at the expressions on the animal's faces. They have no understanding of what the zookeepers are doing or why.

Neither did I really. Like I mentioned at the start, the ecological mission we all know zoos perform is always kind of vague. We know what they're doing and why, but not really how. And in a way it's easy to see why normal people don't get a good look at the details. In execution human actions come off as fairly cruel. In context the subtext is bittersweet. The wild is intriguing and terrifying entirely because we can't understand it, nor it us. Zoos are where those ideas are forced to meet in the middle.