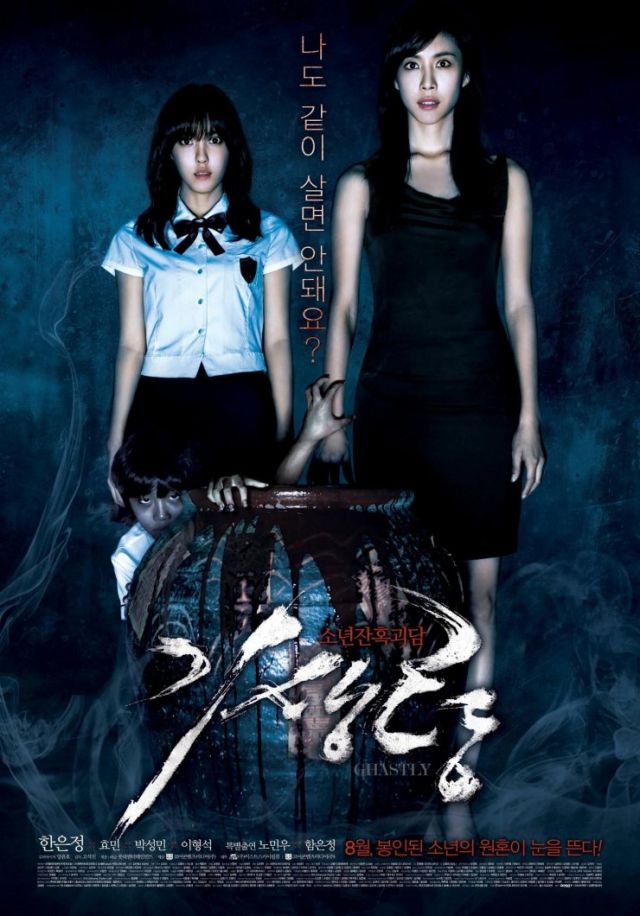 Bloodier than "White: The Melody of the Curse" and darker than "The Cat", Ko Seok-jin's "Ghastly" had me hooked with its savage opening scene. The sound of that knife bludgeoning flesh and bone was sickening and exciting at the same time. Dismemberment and madness is how it all begins, readying our nerves for a nightmarish onslaught of blood, gore, and mystery. All great fodder, but ultimately poisoned by poor casting, hyper energetic cutting, and a troubled and confused narrative. But the manner in which the film constructs its idea of 'horror' is where the real intrigue lies.

In "Ghastly", fear and horror centres on the displacement/shifting of perspective through the disruption of the nuclear family. The opening scene gives us a lot of information on this a young boy suddenly awakens to find his father dead and his mother brutally hacking away at her own ankles. We first encounter the father, now a footless corpse lacking in any power or authority he once held as head of the family. In the adjacent room, the boy's mother holds the knife and is carrying out her own dismemberment with cringing impassivity. The boy (Lee Hyung-suk as Bin) does not scream at the sight of his slaughtered father, or at the horrific spectacle of his mother, he simply asks, "Mom, what are you doing?" His innocence is as cold as the steel used to dismember his parents, and when paired with the self-mutilation of his mother, we know that we are already gazing upon the film's threat in one form or another.

I described the opening scene like this because it typifies the manner in which the film will handles fear within the family structure. Moreover, it contains good commentary on how power within that structure is going to be displaced to serve the needs of the film. The mother is possessed by a virulent spirit that is using her body to carrying out these horrific acts of violence. It is her body we see but her actions are not her own. She has lost control and has been unable to conquer the evil power that is now abusing her body. The ' mother ' as a caring, loving, and nurturing being is shattered and replaced with sado-masochistic kin killer. Interesting then when the next scene introduces the mother Sunny (Han Da-gam), one who more closely represents abstract social ideals we have of the ' mother '.

Sunny is our protagonist, the one who will share the most with us as spectators as we watch her struggle to keep her family together. She is pregnant and her husband has decided for them that they will now live in his dead sisters house and raise Bin. Along with Sunny's younger sister Yoo-rin (played by Hyomin), this new family is presented to us (except Bin's grandmother who is suspicious absence). The nuclear family is no more and the power and agency that exists between members is offset as all involved realign their positions within it. Sunny in the linchpin keeping everyone together and as the story progress she does what all mothers do, she makes sacrifices.

I would consider "Ghastly" to be a text that undercuts the power and safety of the family unit and it does this in a few ways. Although Bin himself is not the actual evil spirit, his is the vessel we have to gaze upon. His innocence as a child is mark by his physical presence on-screen, but the danger he represents is where the fear truly lies. There is great discomfort when children are used as objects for evil. The mind struggles to combat the dissonance between the image and the threat they represent. The result is an fear of unknowing, a sense of anxiety as this disruption taunts us from outside our social schemas of understanding the world. Do we embracing Bin like Sunny does? Are we seemingly indifferent like his new stepfather? Do we cast doubt and suspicion on him like Yoo-rin? Or do we already know all the answers like his grandmother?

As the story leans towards us attaching onto to Sunny, we are face with another conflicting set of beliefs. We know that the boy is sinister but we are locked onto Sunny's unawareness of the situation. We are forced to engage with the ' mother ', watching her being loving and understanding even though we are conscience of the evil that lies within. A perverse and jarring predicament indeed, and it is this displacement of knowledge and form that instils us with fear and horror, a sense of powerless despite our position of power and the knowledge we carry.

Fear in the film is gendered affair. The relationship between gender and the threat is quite well constructed and consistent in the film. Firstly, consider that although the boy kills without favouring one specific sex, it is only those deaths of female characters that are shown on-screen. Bin father was already dead, Sunny's husband and detective were both brutalised off-screen, and even the murder of Bin's schoolmate didn't show the cut of the guillotine. On the other hand we have the disturbing image of Bin's mom thudding away at her self; the shrieks of Yoo-rin as she is scalded to death; and the unsettling scene where Bin strangles his own grandmother. This observation speaks to film's underlying psychosexual concerns of the film as a mechanism used to construct fear and horror. By choosing to have male deaths occur off-screen the phallocentric power of the masculine is subverted and overthrown by the singular male power that exists in the form of Bin. Conversely, the graphic deaths of our female characters act to show alpha male dominance over them. The link between them is that they all represented some form of threat to the evil spirit's potency but their on/off-screen presence draws our attention to the gender differences portrayed in the film.

While the males in the film as discarded with the ease and swiftness of an off-screen death, it is the females who actually have to live through the horror. Sunny and her sister are bombarded with visions and hauntings (although poorly executed technically with hyper-energetic cutting and repetition) while the man of the house is not. Fear and horror in "Ghastly" resides in the female figure through the thematic orientation of the film as a horror as well as through perspective given through female characters. All the female characters have at least a notion of the evil surrounding this young boy, a knowledge or power that brings the wrath of the spirit upon them rather than empowering them. They must submit or die by his hand, with our protagonist choosing the latter as she stays true to her motherly holdings in the film's final, and frankly very cheesy, scene.

But what started this ghastly string of bloodshed? A mother in pursuit of a child she could not have had otherwise. The cruel murder of innocence by the ' mother ' as Sunny's sister claims a young boys life through the ritualistic murder and storage of the young boy. Interesting, the boy's body is stored in a kimchi pot, an iconic symbol of Korea's pride and cultural identity. The pot is strongly link to the female as it is an object found within the home and thus, traditionally, under her care. An unnatural betrayal of the mother towards the symbolic son, and out of that betrayal we can find a link between the evil incarnate and Sunny who must live with the sins of her blood. The link between the spirit's birthing and Sunny's relationship with Bin is an important one that adds depth to the film as well as providing an understanding of their actions during the film.

"Ghastly" did not live up to its captivating opening scene. Technical issues niggled at the film, especially the latter half, as poor filmmaking decisions jarred the experience beyond repair. Questionable casting and basic story line threads were mishandled and it's a shame when the film had such an interesting base holding it together. "Ghastly" is one of those films that lingered with me after the credits had rolled as I began to internalise the meaning of events rather than enjoying how they were actually executed in the film. The film lends itself to an interesting psychoanalytical reading of it, but that does not make it a great film. Should you watch "Ghastly"? It's a short film so it wouldn't distract you for long and it does make for a compelling read if you are so inclined. That is if you can at least stomach the film's one true ghastly moment, its opening scene…