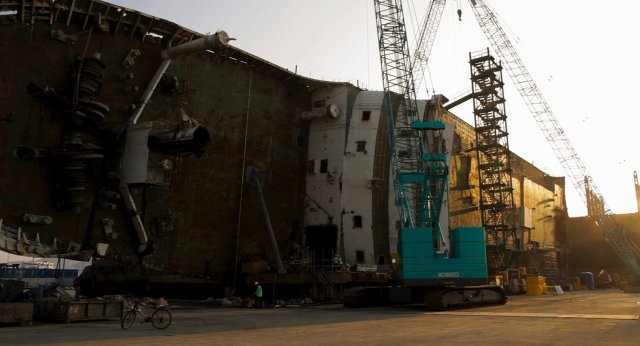 The opening sequence of "Ghost Ship" is crudely and deliberately animated such as to avoid showing anybody's face. While this is done in part because director Kim Ji-young-V is obviously working on a budget, the stark anonymity of this scene is critical. Kim Ji-young-V doesn't explain why right away but the curious story of an unknown tech pirate working in Shenzhen is just a metaphor for the greater ominous information blackout surrounding forensic data relevant to the Sewol ferry tragedy.

Six years after the fact "Ghost Ship" is yet another documentary about Sewol. It's a deliberate follow up to Kim Ji-young's previous documentary "Intention", which provided a compelling argument that the South Korean government manipulated international tracking data in order to lie about the exact route the Sewol ferry took that fateful night. "Ghost Ship" still doesn't have an explanation for why exactly they did that, though the theory presented at the documentary's end is suitably horrifying.

But first, context. The titular "Ghost Ship" refers to an imaginary Swedish boat which was fraudulently registered with international boat tracking websites for reasons unknown. That's what our mysterious Shenzhen hacker is doing in the opening scenes, is just registering the ship's existence. When Kim Ji-young-V contacted Swedish maritime authorities for information on the boat, they confirmed that no such boat with this tracking number had ever been registered with them.

The mystery hacker's activities only grow stranger. Director Kim Ji-young-V goes on to explain how the entire impetus for "Ghost Ship" was the discovery of some strange forensic information uncovered while "Intention" was being researched. Basically, global positioning information for boats is typically registered internationally to keep boats from running into each other. This information is modified as it is registered by the ships, sent to the database, and then returned to verify receipt. "Ghost Ship" quantifies this with an extended parent/child analogy.

This information is labeled differently depending on what point in the process it is. What Kim Ji-young-V discovered was that much of the information regarding Sewol's positioning is simply wrong. We know this because several lines of code are formatted the wrong way. Almost as if someone had been entering in extant data from a different stage of the process, and manually altering the formatting to make the code adhere to the right format. And Kim Ji-young-V also demonstrates that, for reasons unknown, all of this data alteration can directly be traced to an IP address in Shenzhen.

In a way "Ghost Ship" is frustrating. The documentary quite literally ends the moment it gets to its most explosive point, just because Kim Ji-young-V hadn't gotten that far yet in his research. But I can see why he decided to make a documentary that wasn't really finished yet. If his theory regarding the actual reason Sewol sank is true, the implications are horrifying, suggesting a massive criminal conspiracy at the highest level of the South Korean government of which the Sewol ferry itself was only random collateral damage. I can only hope that he has another follow-up.