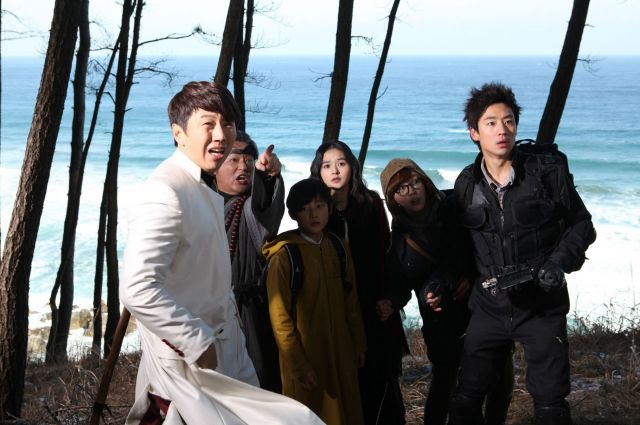 There's many directions a story can go when ghosts and exorcists get involved. There's the always reliable horror element, taking advantage of the human fear of the unknown. There's tragic character study because hey, death is kind of depressing, you know? And then there's the wacky slapstick comedy, which can go all sorts of fun directions since ghosts aren't beholden to such inconveniences as the laws of physics. "Ghost Sweepers" is a movie that attempts to do all three.

We out with some brief comedy introductions of all the relevant exorcists, switches to a convention where a multitude of exorcists prepares to set out and deal with an exorcism. When they actually get out there, the situation turns very serious and the ghost is much more dangerous than originally thought, so everyone who's not on the movie's poster leaves. After that, everything turns dead serious. This isn't a ghost that screws aound- it's strongly implied that people would have died in the first exorcism attempt if there hadn't been so many exorcists holding up the ceremony, and midway through the movie the ghost engages in an act of extremely cruel brutality to another character. Interspersed between all of this are signs of the ghost's former life and various flashbacks from the remaining cast members.

And in between all of this very serious plot is slapstick humor. We transition directly from people's lives being at stake to jokes involving physical comedy, ghost hunting gear, and character interaction among a ragtag band of misfits. As ghost stories go, the exact motivations behind the malevolent spirit in "Ghost Sweepers" aren't particularly impressive. And the comedy only serves to draw more attention to this fact. Effective grim jokes can be made in a situation like this- but the humor in "Ghost Sweepers" is more like "man slips on a banana peel" funny. There's never any sense of serious mortality or fear from any of the characters, even though by any rational metric they should be frightened out of their wits. Outside of the serious scenes, it feels like they're just playing a game.

It's a bit of a shame, since at some points the comedy is nearly inspired. The main character, reporter Chan-Young (played by Kang Ye-won), is surprisingly effective at violence considering she literally has no idea how to fight. The titular "Ghost Sweepers" all have their own peculiar comedic quirks as well- unfortunately, because the plot is so serious and takes so much of the screentime, we get very little chance to see how these quirks relate to the characters' motivations. For the most part, even though the ghost is clearly established as being incredibly dangerous, most who stay behind to fight it do so with no explanation. Chan-Young's character is in many ways wasted- as a reporter, she has the perfect excuse to ask the "Ghost Sweepers" how and why they operate and let us learn more about them. Instead, we're clumsily handed this information through flashbacks. Even Chan-Young herself spends an inordinate amount of time just lamenting her own tragic (and frankly boring) supernatural backstory.

I consider "Ghost Sweepers" writ large to be a statement on why it's important for stories (supernatural ones in particular) to try and stick to one tone, and deviate it only when necessitated by the story. I think this cast and concept was good enough that they could have wrung a decent movie out of this- but the script needed more rewrites and someone needed to seriously ask the question "what kind of movie do we want this to be?" If you like the actors and you don't mind having your mood arbitrarily jerked around, "Ghost Sweepers" might be worth a watch. Anyone else should pass.