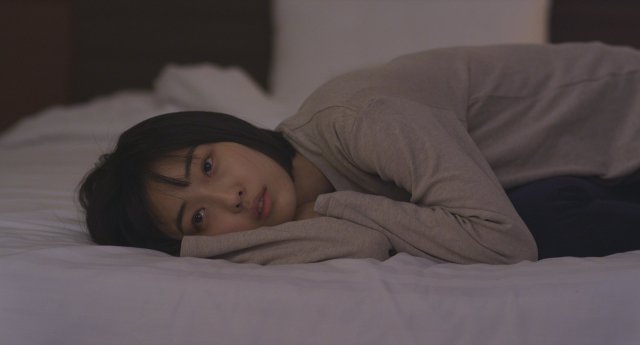 Hye-jeong (played by Han Hae-in) has a depressingly meaningless existence. We see her lumbering about day by day, refusing any interest in any kind of normal conversation. Even a love confession ends on a surprisingly somber note, as we see Hye-jeong looking out the window, as if she was hopeful the guy might actually stick around. Hye-jeong has no money and no future. So it's oddly enough not much of a transition for her die and become a ghost.

The scene where we see Hye-jeong figure it out is especially weird, because we had already seen her do other things since waking up. The first clue she gets that something is wrong is when she tries to buy something except that shop clerks obviously can't see ghosts. In the inherently lonely existence of the modern world, there's something genuinely spooky in that. How much human interaction do we have in a normal day? How long would it take us to notice that we're already dead?

From there "Ghost Walk" takes on a distinctly purgatorial air. While Hye-jeong is living days backwards we can see her re-experiencing, as if through memory, all those moments of her recent life where she rejected material attachment to the world of the living. There is massive regret at play in those scenes, as if Hye-jeong is only just now realizing how unhappy she was and how there were opportunities to change that, if only she would change her attitude.

But then in equal parts there are those moments where we can clearly see Hye-jeong thinking no, well, no, that wouldn't have worked either. Hye-jeong is completely helpless when it comes to actually affecting meaningful change, what with her being a ghost and all, so all that's left is endless speculation. In this way "Ghost Walk" is a genuinely convincing vision of hell, where Hye-jeong may well not be a ghost at all, but just having her life flash before her eyes in her most helpless moments.

Unfortunately, just as Hye-jeong is bored to oblivion by her own pathetic life, so too are we as viewers similarly exhausted. Knowing, as Hye-jeong does, that all these bad decisions she's witnessing will have disastrous consequences later on it's hard not to feel a pretty strong sense of ennui. The main moments of sincere pity we get come coutesy of Soo-yang (played by Gam So-hyun), a child who as a child at least has a pretty good excuse for not understanding just how horrific and dangerous the ongoing situation really is.

This tonal is the main thing "Ghost Walk" has going for it. There is an entire plot going on in here about, I don't know, a serial killer or something, but I just wasn't engaged with it because weirdly enough Hye-jeong isn't either. She's already dead. Answers are extremely not useful in that particular context. Since writer/director Yu Eun-jeong leaves the viewer in constant flux over whether Hye-jeong can actually change past events, so too, do we feel helpless as she does.