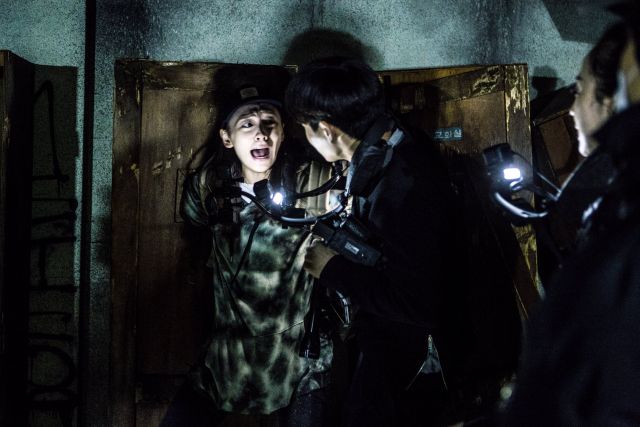 The Gonjiam Mental Hospital has a suitably horrific backstory regarding the abuse of mental patients, and there are plenty of eerie pictures floating around the Internet of the abandoned building's creepy interior. The disappearance of a couple of teenagers whose last known activity was investigating the site for kicks and giggles has further improved the Gonjiam Mental Hospital's mystique. So it is that Ha-joon (played by Wi Ha-joon) puts together a team to investigate the facility and posts their findings via a live online stream.

"Gonjiam: Haunted Asylum" is a found footage film...sort of. Ha-joon is interested less in finding ghosts than he is in trying to make money by maximizing viewers. No one on the team actually appears to believe in ghosts. As they see it, the whole experience is just an elaborate performance. Creepy events are intentionally staged, and to maximize their method acting, the various members of the team do not tell each other everything they've planned, so the surprises end up being legitimate, even if they are at times obviously exaggerated.

For awhile we're also left in the dark as to whether or not the asylum is actually haunted. Director Jeong Beom-sik is intentionally vague about which footage appears in the broadcast and which footage is just backstage communication between Ha-joon in mission control and everyone else on-site. Anything sufficiently ominous is good fodder for the broadcast, so the only particularly explicit clue is when the team members are discussing their performance in the abstract.

The inability of anyone to tell how serious anyone else is being at any given moment leads to some disastrous communication breakdowns. Now, "Gonjiam: Haunted Asylum" is itself obviously staged. The horror movie effects are created by standard makeup and special effects without supernatural influence. So the question is constantly begged- why can't the latest terrifying moment just be a case of a team member showing good initiative?

At least, that's how Ha-joon interprets the situation- but as the only person with access to all the cameras, Ha-joon tragically fails to realize that he needs to know what is happening at all times, even if the other characters do not. And that's pretty much as complicated as "Gonjiam: Haunted Asylum" ever gets. While the premise is generally intriguing, "Gonjiam: Haunted Asylum" is unapologetically a gimmick horror film, where the only relevant character trait is narcissism prefacing a cosmic reminder of just how insignificant any individual human life really is.

Which in all fairness is all a horror film really needs to do. While "Gonjiam: Haunted Asylum" is nothing special in terms of individual scares, the movie is elevated by its backdrop. We can actually see the various characters trying to talk themselves into thinking they're on the cusp of magnificent success. Though their doom is inevitable, the ambiguity of the premise always provides just enough hope that maybe there really is a happy ending waiting around the next corner. Even if we as viewers never really believe that, it's essential that the characters do. There's no fear without hope.