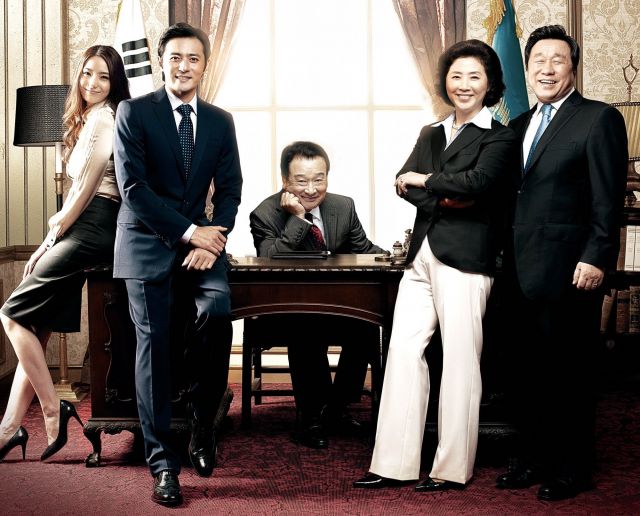 Presidents are just normal human beings like you and me. In "Good Morning President" writer/director Jang Jin takes this banal idea to its natural conclusion. What if presidents were so normal, that they were like characters in situation comedies? What if dignified elder statesman Jeong-ho (played by Lee Soon-jae) had a preternatural obsession with the lottery? What if young hot-shot Hi-wook (played by Jang Dong-gun) kept getting distracted by bodily functions? What if the efficient businesswoman Kyeong-ja (played by Go Doo-shim) had to deal with her bumbling idiot husband Chang-myeon (played by Im Ha-ryong) unintentionally fomenting disaster?

Well, to be fair that theme doesn't work quite so well with Ji-wook. The first transition from Jeong-ho to Hi-wook is really awkward. Jeong-ho's story is just an excuse for Lee Soon-jae to turn his brilliant comedic timing to use in an obviously absurd hypothetical scenario. But Hi-wook's hypothetical involves serious business like battleship movements and domestic political reactions and one really weird scene where a meeting with the Japanese diplomatic corps is framed by Chinese music and background design.

In retrospect it's odd how Hi-wook's story isn't more about his romance with Jeong-ho's daughter I-hyeon (played by Han Chae-young) or single dad problems. It would fit the overall theme much better, but I guess writer/director Jang Jin just had to get all aspirational about how nice it would be if South Korea had a proactive president when it came to foreign policy. Incidentally this attitude is a pretty good predictor of current real-life president Moon Jae-in's popularity.

But the politics in "Good Morning President" really aren't worth overthinking. This is a movie where presidents are hospitalized multiple times over impulsive decisions and random sudden shocks. Major political scandals are recontextualized as minor domestic squabbles which become national news because, well, because the president is involved. One scene features frequent apparently random cuts to a spouse watching a soap opera which is funny mainly because we're left thinking, whoa, presidential families watch silly low-brow television too?!

As long as the focus is on the jokes "Good Morning President" is on fairly solid footing. I particularly liked the one about random white people taking up seats at sitting room only political events which they don't actually understand since they can't speak the local language. Also, Im Ha-ryong plays a great idiot. I love how Chang-myeon always trying to be the perfect supportive husband to his superstar wife, it's just that he's totally incompetent so Kyeong-ja has to love him entirely on the strength of his effort.

All the same on an aesthetic level "Good Morning President" is intrinsically flawed because what we really have here are three really good ideas for punchy, ninety-minute comedies compacted and stretched out into a one hundred thirty minute omnibus. That's a ridiculously ambitious scope for an intrinsically silly idea, especially when there's so much territory the movie doesn't even get into. For awhile I really thought the entire movie was just going to be about Jeong-ho's lottery ticket- he even loses it at one point, and we never see him get it back!