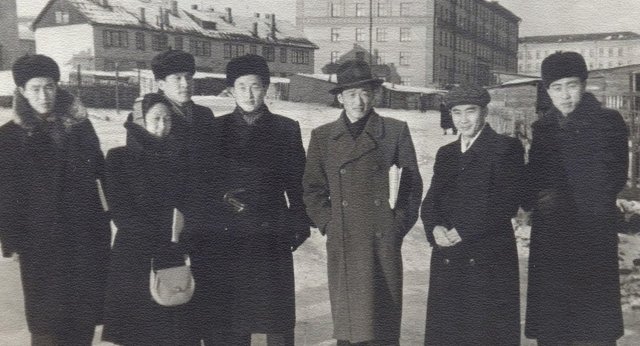 Following the Korean War young ambitious North Korean communists who had managed to survive the war were on the prowl for educational opportunities abroad, which the North Korean government gladly facilitated. Eight such Koreans went to attend the Moscow Film School so that they could learn how to make proper revolutionary film. But their situation takes a turn for the strange after the August Faction Incident in 1956, when political purges back home mostly nullify any chance they have of going back to North Korea.

A lot of "Goodbye My Love, NK" is just stuck detailing the finer distinctions of different kinds of communism. That much is inevitably required for context, since these students evidently believed in Soviet communism so strongly they were willing to risk permanent banishment for those beliefs. Emphasis on the past tense. What any of these people believe in the present day is left ambiguous, but it's hard to ignore the reality that Soviet communism collapsed while North Korean communism is still around.

This reality is surprisingly irrelevant though. As trained filmmakers these exiled Koreans were still of use to the Soviet Union for the purpose of making revolutionary films. As is the case with most Soviet films, there's an enigmatic quality to the footage, but the irony is even more pronounced than usual here. These were class struggle based adaptations of Korean folk tales or Korean life experiences being adapted for an audience that was not Korean or in many cases even Russian.

As Soviet communists these filmmakers believed in international solidarity. That was, after all, why they went to foreign film school in the first place. But the reality turns out to be much different from the dream. Even as these people marry and make mixed race families, there's a deep loneliness at play from they're being trapped so far from home. While these Koreans don't regret anything...well, have you ever made a decision you felt was the right one, and still do, even if in the long run it made you sad?

That tone is the main focus of "Goodbye My Love, NK" which director Kim So-young-I films in the same dreamlike style she did "Sound of Nomad: Koryo Arirang". I imagine she collected footage for both films around the same time. They cover the exact same subject matter of Koreans in diaspora in the Soviet Union, and the art they made to reflect their sense of being trapped adrift, with interviews in heavily accented Korean or Russian as necessary.

But more than the stories the visual exposition of "Goodbye My Love, NK" is that of an alien world. We constantly see endless flat landscapes with odd random spots of vegetation. The metaphor here for the strange new world the North Korean political dissidents found themselves in after the hustle and bustle of Moscow is an apt one. There's an oddly hushed tone to the apparently grandiloquent nature of the stories profiled- as if the North Koreans themselves can barely believe this all actually happened.