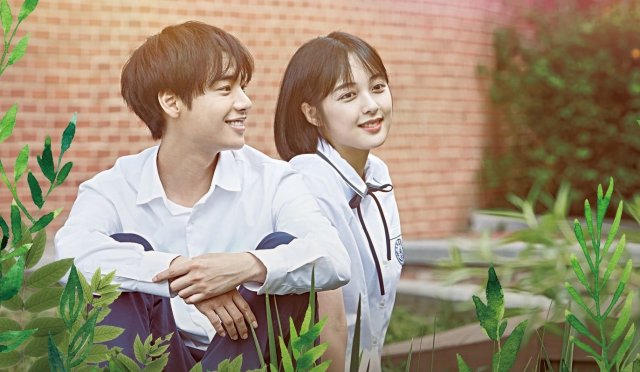 Hyeon-jae (played by One) is helping his female friend Soo-min (played by Kim Bo-ra) make an interview video for prospective colleges. In the summer heat of Anyang, we can see that their friendship is one of remarkable steadiness, patience, and synchronization. So why aren't they actually a couple? Well, Hyeon-jae has a lot of not particularly convincing answers for that. Oddly enough none of them have much to do with Hyeon-jae being very sick.

The tone in "Goodbye Summer" is very deliberately off. The movie has the feel of a melodrama, with that same constant sense of doubt over what really matters in life. But the feeling here is very abstract. Hyeon-jae constantly rationalizes over what his priorities in life should be, never really catching the obvious hint that actually he could die at any time. There's urgency, but neither Hyeon-jae nor Soo-min can really internalize that because they have this mental picture of themselves as young people with the rest of their lives ahead of time.

This is all a startlingly accurate metaphor for high school. Sure, adults are always telling you not to worry about it, how different everything will be later...but it's still a very formative time of your life. You don't get summer vacations again, even if you become a high school teacher, because the context will be very different. While Hyeon-jae and Soo-min have a sort of vague impression that they might regret not being more open about their feelings, their actions are stifled because they refuse to believe it.

Byeong-jae (played by Lee Do-ha) is the most aggressive personification of doubt intended to spur Hyeon-jae and Soo-min to action. His thematic role is so obvious for awhile I was wondering if he was an actual character at all, but we get just enough traits of him being a deliberately specific show off to see that no, Byeong-jae's not an angel, just an overly nosy high school kid. Other high school students who briefly interact with Hyeon-jae show similar motives. Byeong-jae is delightfully oblivious to the fact that he's popular.

Soo-min though...well, we don't really know that much about her, since "Goodbye Summer" is from Hyeon-jae's perspective. As a result I disliked her through most of the movie, only really being able to figure out her actions when at the climax she finally explains them. There's something especially bittersweet in that airing out of feelings- a kind of fake resolution, really, since the future romance of our lead couple or even Hyeon-jae's long term survival is deliberately left ambiguous.

But then that's the feeling "Goodbye Summer" is going for. The movie aims to replicate what high school is like by presenting a future of infinite possibilities and then showing how teenagers are paralyzed at the prospect of having to pick one. It's a dark, accurate vision of how it feels for a person to grow older- like how one by one, new possibilities are falling away. That's not a happy ending more because it's not an ending than it is because it's not happy.