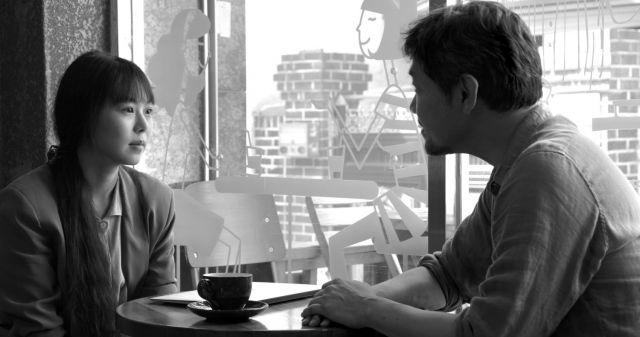 Writers tend to be socially isolated weirdos. Or at least, that's the stereotype, so one point of clichéd advice frequently given to aspiring creative types is to go the a café and watch normal people interact. There's just one problem. The kind of people who hang around cafés aren't really any more normal than aspiring writers, and frequently tend to be aspiring writers themselves. This is the lesson which Ah-reum (played by Kim Min-hee) repeatedly fails to learn as "Grass" progresses from one random out-of-context conversation to another.

Literally all that happens in this movie is that we see two people talking at the café in gorgeous black-and-white. They're polite for awhile and have normal boring conversations until one very weird detail pops up, anf further discussion of the detail provokes one respondent into a big emotional outburst while everyone else looks on awkwardly. Ah-reum is then slowly brought into frame as a dispassionate observer, typing away with intense concentration.

The first conversation is the only one that does this in a straightforward manner. Further conversations add increasingly obvious gimmicks. The sudden appearance of ambient public domain songs, for example, initially meshes well with the tone of the conversation but eventually becomes discordant and oppressive. Ah-reum's attempts to act as a dispassionate observer are ruined as other characters notice her and question her motives, while she does not question theirs. Ah-reum herself takes a commanding role in a conversation, not noticing the irony.

All of this cycles into an obvious feedback loop. While Ah-reum thinks she is being an open-minded educated person who is making a careful study of human nature, the very act of observation changes Ah-reum's outlook in mostly harmful ways. She becomes inured to petty lies to the point she just assumes people are telling them all the time. Ah-reum also actively escalates calm social situations and passively endures awkward aggressive advances solely for the sake of trying to advance the relative drama of any given scene.

The criticism being made of writer culture is obvious. Or at least, it would be if "Grass" were being targeted at a perspective audience beyong writers. The paradox of the movie's existence is that writer/director Hong Sang-soo at this point makes his living entirely by making movies designed to appeal to the kind of people likely to go to film festivals- that is, creative types, or alleged creative types, much like the ones who populate "Grass" itself. People like that are no more capable of seeing the ironic subtext present than Ah-reum.

"Grass" is a movie about pointless lack of accomplishment being personified in lazy metaphors that spring up from half-understood conversations where the missing pieces are filled in by biting cynicism. The film says a lot more about the people who made it than it does anything about the human condition. Of course, whether socially isolated weirdo writers are even capable of more meaningful expression than that is, well, also a pretty important part of the thesis here.