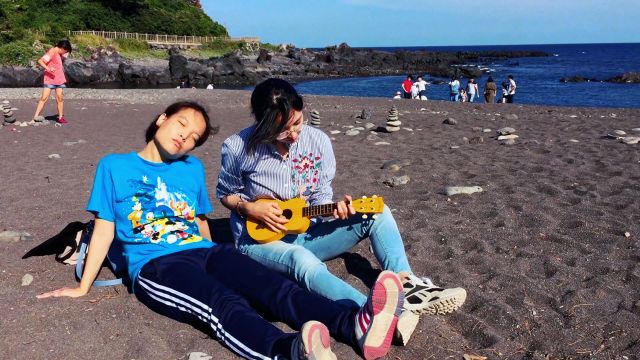 The last time writer/director Jang Hye-yeong saw her mentally challenged younger sister Hye-jeong was...um, that detail's actually a bit unclear, come to think of it. We're explicitly told that that Hye-jeong was put in an assisted care facility at the age of thirteen, and that the subject of "Grown Up" is the decision made by writer/director Jang Hye-yeong to remove her sister from the facility and live together with her some seventeen years later. But an awful lot of the background is surprisingly vague.

The omission of this information is likely a consequence of the documentary's deliberately narrow scope. "Grown Up" is about Hye-jeong's adjustment to life in the real world. Oddly enough Hye-jeong herself suffers few difficulties through this process. The understandably childlike woman is always happily bouncing around and dancing. The main problem comes when anyone tries to get Hye-jeong to actually do aything.

"Grown Up" does not deal with this issue as much as I would have liked to see. In contrast to "Myeoneuri - My Son's Crazy Wife" which spotlights a dysfunctional family with all its warts, writer/director Jang Hye-yeong avoids showing us too much that might render any of the profiled people unsympathetic. While much is made of how Jang Hye-yeong is relying on the help of her new extended family to take care of her sister, it's left very vague who these people are or why Jang Hye-yeong trusts them so implicitly as to leave them alone with her sister as a caretaker via relay.

The only fact of which I am confidently certain is that they are friends rather than relatives. The first reference we get to the household the sisters grew up in comes up at the halfway point, during an audio-only conversation with a social worker. The existence of a third older sister who married a foreigner, as well as the revelation that the parents of this family divorced at some unknown point, beg a lot of questions that aren't answered.

So given the complete lack of context, what exactly does "Grown Up" use to fill up its runtime? Well, mostly we just get lots of scenes where Hye-jeong spends time with her sister, or goes to a class, or starts dancing apropos of nothing, and most usually some combination of all three. Probably the most distinctive bits are where Hye-jeong goes out on dates with Jang Hye-yeong's male friends. That is (presumably) not what they're actually doing, although that's what any random bystander would assume.

Hye-jeong is a charming enough leading lady I did find her adventures diverting. In a way I actually admire her directness. When Hye-jeong expresses impatience or frustration with something, all anyone can really do is acknowledge it and try to find a more constructive way of interacting with her. In this way we see her grow from childlike simplicity to being able to compose the song that plays over the closing credits. Still for a one hundred minute documentary, such simplistic material is fairly thin- and after awhile I was impatient for the story to end.

"Grown Up" is directed by Jang Hye-yeong.