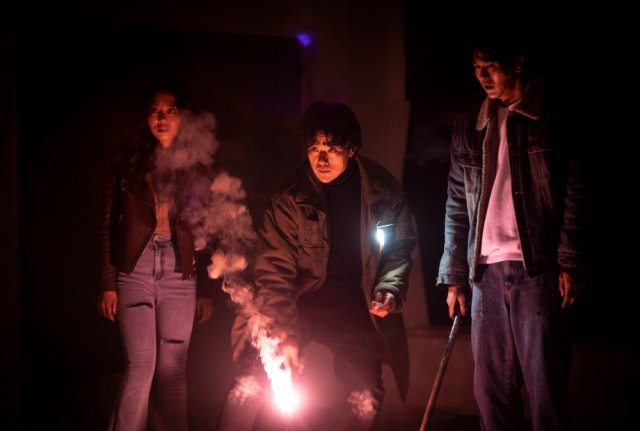 In the opening to "GUIMOON: The Lightless Door" we see a shaman (played by Lee Hwa-young) attempt an arcane ritual to bring peace to a reformatory. This follows a horrifying moment where a corpse is discovered within its walls. Years later her son Do-jin (played by Kim Kang-woo) travels to the reformatory in person to attempt a similar exorcism following his mother's failure. But soon after time itself becomes a fungible quantity. Once inside the building, the subtitles start to frequently distort to indicate abrupt shifts to past events in the reformatory's sordid history.

Despite being billed as a mystery rather than a horror film "GUIMOON: The Lightless Door" is rather light on exposition. I'd actually go so far as to say a person could probably grasp the plot without even understanding Korean. Certainly, the exact reason why three college students enter the the reformatory are easy enough to grasp. They just want to have fun, and love scaring each other so much they're slow to catch on to the reformatory's genuine paranormal danger.

"GUIMOON: The Lightless Door" benefits from masterful ambience as director Shim Duck-geun focuses on backdrop rather than jump scares. There's almost never a time where we're actually expecting something scary is going to happen. The reformatory itself is just naturally claustrophobic and creepy, with frequent ominous cues. When one door closes, others open. Wind appears to be blowing from nowhere. And there's always sick, ominous laughter just around the corner.

This sense of ambience mostly makes up for the movie's main obvious failing, which is the lack of any particularly interesting characterization. It's only quite late that we get a good look at shovel murderer Seok-ho (played by Jang Jae-ho-I) and learn why exactly he committed the crimes that led to the reformatory being shut down. As it happens that explanation is disappointingly straightforward, and not exactly something that required investigating the reformatory itself to figure out.

Elsewhere on the technical end, "GUIMOON: The Lightless Door" benefits from some fairly superb lighting. It's always easy to tell exactly what's going on despite nearly every set being completely draped in shadows. The occasional moment of teleportation is exactly that- inexplicable teleportation, where a character is in a new place but isn't at all sure how or why. In one late scene we even find out the fate of one unfortunate person who teleported away earlier in the movie, only to find himself in a new unsettling environment.

The obvious craft by which "GUIMOON: The Lightless Door" works on a technical level only serves to frustrate me more looking back and realizing the movie wasn't really making any kind of statement or telling much of a story. I can only imagine how this movie must have looked like in ScreenX. The more we see of the reformatory the more cramped and oppressive it feels, with the prospect of escape slowly dwindling down from probable to naive. I just wish there had been better character motivation than just Do-jin trying to resolve his mother's grim fate.