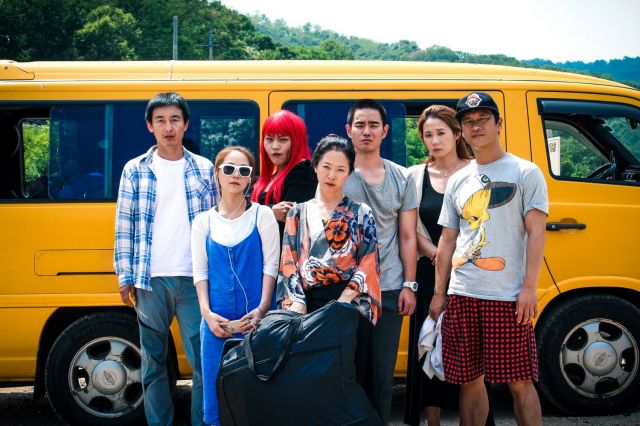 The family at the heart of "Happy Bus Day" is highly dysfunctional. I don't mean that they're quirky eccentrics, I mean that most of them simply are not fit to mingle with normal human society as we know it. Their emotions range on a spectrum from blithe apathy to psychotic overreaction. The sole sane character is Sun-young (played by Kim Sun-young) who tries her best to be a normal housewife but is stymied by the sheer antisocial weirdness that is the household she married into.

Consider Sung-il (played by Lee Ju-won), a physically intimidating guy whose only interests seem to be lying around, eating, having sex, and beating people up, in that order. It's hard to tell whether Sung-il doesn't notice that he makes other people uncomfortable, or just doesn't care. He even comes complete with a girlfriend whose only apparent personality trait is to spout out mean-spirited laughter at the slightest provocation, and is otherwise just as slothful as Sung-il.

Sang-hoon (played by Park Ji-hong-I) occupies a somewhat higher tier of human decency, as she is a pre-transition transwoman. Of course, given how Park Ji-hong-I is a pretty big dude, it's hard not to feel uncomfortable looking at him pretend to be a stereotypical Korean girl. Sang-hoon doesn't look that bad, when properly made up and everything, but wearing casual clothes at home? Yeah, it's hard not to cringe at least a little at her appearance.

I could just go on giving individual character portraits indefinitely, since there certainly are a lot of characters, each distinctive in their own uniquely horrifying way. But "Happy Bus Day" is very much an ensemble piece. They've only assembled together for a special occasion, one that does eventually involve a bus. Yet there's very much a dread urgency about the topic, as if the specific rationalization is less important than the burning desire of all the family members to go back to pretending like the others don't exist.

In this way "Happy Bus Day" is a fairly strong entrant into the comedy genre of horrible people just generally being horrible to each other. Even when they're trying to be nice and helpful, somehow, that just makes their behavior even worse. The tone is so extreme I'm really more inclined to call "Happy Bus Day" an alleged comedy than anything else. Even though all the moments of despicable behavior have obvious comedic timing, the jokes are so incredibly dark I didn't laugh at any of them.

Which is funny in a meta way, since I tend to consider myself a fan of dark comedy. It's just...when "Happy Bus Day" sets up and then follows through on an extended rape joke, I stared at the screen dumbfounded for awhile. "Happy Bus Day" is perfectly authentic. In the United States these are the kind of people who'd be called white trash. Director Lee Seung-won-I seems to have a fascination with such intrinsically awful people- although much as was the case with his other work, "Communication and Lies", there's a definite sympathy there.