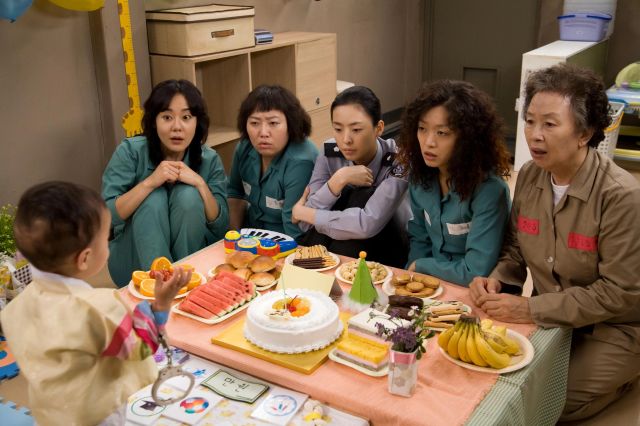 Jeong-hye (played by Kim Yunjin) may be a killer, but she's also a loving mother who relishes every moment with her infant son in prison. The alarming contrast between those two tonal ideas is where most of the back-and-forth in "Harmony" comes from. This is a movie about the fundamental humanity of women in prison. Long before the whole prison women's choir hook of the plot comes up, the main hook here is about relationships between adult women.

"Harmony" unwinds its narrative steadily along these lines. Their backstory is not considered as relevant as who they are right now- then we see the backstory, and get some idea of how they came to their current emotional state. Pretty much all the women are victims of patriarchy, although some have received decidedly more unjust punishments compared to others, which can feel frustrating.

But "Harmony" is a movie about acceptance, not justice. The idea is bittersweet. Right from the opening birth scene director Kang Dae-gyu is always trying to liven up the proceedings with excessively cheerful music, and weirdly enough, this works. By sheer force of will, we can see how Jeong-hye, the women in her cell, and even sympathetic jailer Na-yeong (played by Lee Da-hee) can make an inherently dreadful situation seem pleasant by just focusing on the moment and not getting too worked up over the past or the future.

This is the atmosphere in which the big choir scenes need to be appreciated. Even though the script does give Jeong-hye a technical reason to want the choir to succeed, it's clear from the beginning that this is just false hope and won't radically alter the full outlook of her bad situation. What's more Jeong-hye is a terrible singer, not that this matters too much in a group ensemble format. So why is she so determined? And why is it that even in the final act, Jeong-hye manages to persevere having finally managed to lose everything?

Because "Harmony" is a story of sisterly bonding. The women in "Harmony" are in jail, metaphorically, for committing crimes against their families. Fair or not, the only way to recover from this punishment is to make a new family with each other and maximize their mutual empathy. While Na-yeong's gleeful participation in Jeong-hye's son's party at the beginning seems crazy at first, once we've seen enough of these women, Na-yeong's desire to get involved emotionally with the prisoners makes sense. They're all in this together, even if they don't realize it.

There's surprisingly little conflict in "Harmony" which further reenforces these themes, and matches up well with the title. "Harmony" is a warm-hearted women's prison movie about the futility of struggle. The ability of the women to make beautiful music together emphasizes that, and is what makes the story so touching. Even when external forces conspire to take this humanity away from them, the women just have to keep trying to make the best of the situation. In the end, that's all they really can do anyway.