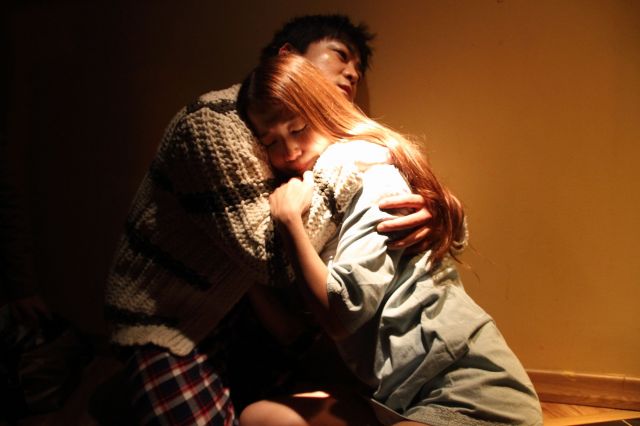 At its core "HARU" is a very simple story. Man meets girl with daddy issues...actually, just finish the rest of that sentence yourself. At every level this is an inherently creepy film. Haru (played by Ayaka Tomoda) has a child-like temperament. It's not an affectation or anything, it's more like Haru's a child desperately lacking in approval and comfort even though as far as we can tell she's not even a bad person. She wants approval, most immediately in the form of people convincing her not to kill herself.

It's easy to see how she got this way, considering Haru's parents. We never see her father, but I think it's safe to say he's not much help given that he was a lot closer to her physically than Soo-hyeon (played by Jin Hye-kyung), Haru's ultimate choice for emotional support. But Haru's mother isn't much better. Soo-hyeon lives in a different country than her mentally unstable daughter for two reasons that I can see. First, it lets her run a bar, where Soo-hyeon caters to clients she doesn't actually like that much. Second, Soo-hyeon is able to live with her husband, psychiatrist Yeong-woong (played by Kim Kyung-ik).

He's an all right guy, I guess, but consider the context for a moment. This woman's daughter is suffering from obvious mental issues. Soo-hyeon marries a psychiatrist. And yet the first he's aware of any of this is when Haru comes to crash at her mom's house in an effort to wait out the latest bout of depression. I don't think Soo-hyeon's a bad person or anything, but it's pretty obvious that she should have either not had a child or put more effort into parenting.

And as for Yeong-woong, he means well too, but it becomes depressingly more and more obvious as the film wears on that he's seeing Haru in a sexual light, and that even if this isn't legally pedophilia, it's definitely psychiatrically creepy. Haru will do anything he says simply because Yeong-woong is the only faint gasp of steadiness she has in her life at the moment. Her expectations of him are unrealistic, as is made all too obvious by the camerawork done from her point of view. At one point we see an image that makes it look like Yeong-woong is walking on water, even if he obviously isn't.

So, how about depression then? The film seems to take the view that it's caused primarily by a surfeit of interaction with people who care about you in the abstract sense mainly because it helps them bolster their own self esteem. That sounds rather on-point, unfortunately. I'm sure psychiatrists will disagree on that, but given that all Yeong-woong really does with his patients is just listen to them...well...

"HARU" is a sad, hopeless story of people who screw up even though they know better. It's not a particularly deep message, and the trajectory is fairly predictable, but the production values are good enough to sell the sense of melancholy. Even when the acting at times feels listless, it's a reasonably enough reflection of the overarching emptiness of these characters' lives. I don't know if that's what you're really looking for. Just, whatever you do, don't go into this movie for the sex scenes. They're not worth it. Which again is probably the point.