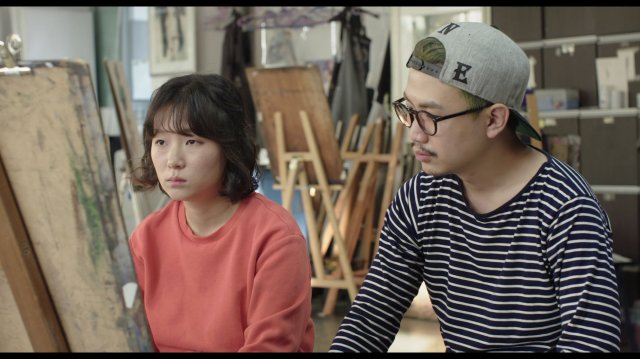 Much like the similar roles Jeong Ka-young has played in her first two movies, "Bitch On the Beach" and "Hit the Night", there's a fairly unsubtle autobiographical implication in "HEART" as we once again watch Jeong Ka-young pester men into finding her sexually attractive. Admittedly I have to give props to her sophisticated understanding of how the male mind works. Talk to any man long enough and he's going to start thinking about sex because why else would a woman doggedly insist on talking to him?

It's funny how Jeong Ka-young does a much better job of getting into the heads of men than she does in actually explaining the female perspective. Part of what makes Ka-yeong such an aggressively wishy-washy character is that she's not really sure what she wants. Observe how the only explanaton Ka-yeong can give for wanting to philander with a married man is that she thinks he's sexy. Then we actually meet him and it's like... he's OK, sure, but not exactly forbidden fruit.

I suspect that the reason why Ka-yeong wants to hang out with men in a vaguely sexual conversational way is just because she's bored. Not lonely. Bored. Ka-yeong can and does wander into random buildings and outdoors enclosures and just starts conversations with whoever happens to be nearby. The bumbling nature of Ka-yeong's conversational style is unavoidable even as she gives explanations for why. Every man she taks to feels like a stranger even when their relationship is more clearly explained.

This lends to a weidly supercilious air as the characters in "HEART" dance around their darker more substantative thoughts about what they actually might be getting at. I rather enjoyed a dark mid-point that takes a swerve toward horror where the only scary thing the dark ghostly versions of the characters do is...discuss sinister long-term plans. Like maybe having a relationship with a little more substance than just randomly getting drunk and discussing petty problems with equally petty solutions.

There is, practically by design, not a great deal of substance to these ideas. And it's surprising, really, just how long "HEART" feels when the runtime is only maybe seventy minutes. But that's pretty unavoidable when the movie is so deliberately about aggressively passive characters who can take forever just to work up the interest and motivation to make a single decisive statement. "HEART" offers an oddly realistic take on what the sexual revolution actually looks like in practice. There's less sex and more just endless negotiation, even in terms of unheard internal monologues.