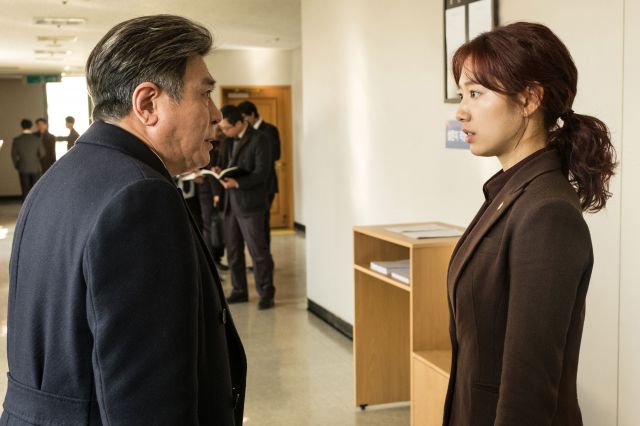 The literal Korean title of "Heart Blackened" translates to just silence. It's a pretty accurate overall descriptor. "Heart Blackened" has several long stretches of time that pass in absolute unsettling quiet. Which of course, is also metaphorical. Mi-ra (played by Lee Soo-kyung-I) hates her new prospective stepmother Yoo-na (played by Lee Hanee), and in the wake of a horrible accident, Hee-jeong (played by Park Shin-hye) is retained as an attorney to defend the last woman left standing.

But more than any of the leading ladies it's really Mi-ra's father, corporate bigwig Tae-san (played by Choi Min-sik) who commands all the stage presence. And as is to be expected, Tae-san accomplishes this through careful deliberate use of silence. No one ever really has any idea what Tae-san is thinking at any given time. No doubt this personality trait serves Tae-san well in the boardroom. It definitely allows him to put a strong impression on Hee-jeong, at least.

The tragedy, though, is that this very same personality trait has made Tae-san a fairly lousy father. Mi-ra is never sure where he stands on anything. She doesn't even know why Tae-san worked so hard to employ Hee-jeong, of all people, to serve as her defense attorney. This is a useful lens by which to view the unfolding events of "Heart Blackened"- Mi-ra knows exactly what happened that night in the garage. To her, there's no physical mystery. What she doesn't understand, and what takes up all the dramatic weight, is how her father feels about those events emotionally.

That's where Yoo-na becomes important. Yoo-na doesn't really have much screentime, but everything we do see of her interactions with Tae-san and Mi-ra indicates that she is a very sensitive woman. Most alarming are the hints we get that Yoo-na actually knows quite a bit about Tae-san's relationship with Mi-ra- because he told her about it. Yoo-na wants to make a happy family for all of their sakes.

At least, that's the real Yoo-na, probably, because the scenes where we see Yoo-na from her own perspective are more reliable than the more abstract impressions we get from Dong-myeong (played by Ryu Jun-yeol), an obsessed fan who teams up with Hee-jeong to solve the case. It's unfortunate that neither Dong-myeong nor Hee-jeong leave much of an impact emotionally, but then again they represent the arm of the story that is all about detective work. As detective stories go, "Heart Blackened" is certainly above average. No gimmicks are used in the construction of the mystery. We learn new information at the same time Hee-jeong does.

It's really just a tribute to the big finale, where the far more intriguing emotional mystery is explained, that the physical mystery ends up coming off so unimportant by comparison. "Heart Blackened" is a surprisingly complex love story. At any rate, it's a love story that's a lot more powerful than it has any right to be, considering the three principles (corporate boss, neglected daughter, and gold-digging starlet) are some of the more generic archetypes imaginable.