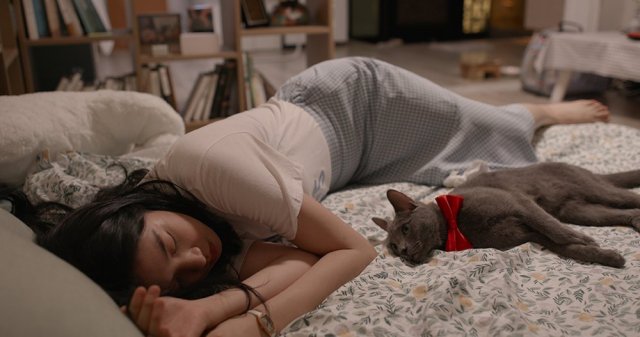 In the first story of the "Hello, My Cat" omnibus the cat talks. He talks a lot. It actually get to be really annoying very quickly since he never has much to say, he's just narrating stuff that we can already see is happening on-screen. The talking cat device is particularly obnoxious because in the second section of the omnibus, the cat only talks very briefly at the beginning. Then in parts three and four the cat is conspicuously silent, leaving the animal's motivation ambiguous.

"Hello, My Cat" is a movie clearly designed for people who like cats. It is admittedly a decent enough target audience to pick, since pretty much everyone loves cats. But as an omnibus "Hello, My Cat" gives off the weird impression of being a work in progress. As in, the writing/directing team of Bok Woonsuk and Shin Hye-jin would look at one of their finished short films, notice the flaws, and then rewrite the further sections accordingly.

Consequently each film is better than the last, although not significantly, and your ability to tolerate the fairly simplistic plotlines is going to depend largely on how much you like cats. There are some reasonably interesting themes here, as each movie depicts a possible reason for getting a cat. In the first one, the cat is an ill-thought through physical manifestation of a romantic relationship. In the second, the cat appeals to a dejected middle-aged office worker. In the third, the cat appeals to a child. In the fourth, the cat appeals to an increasingly senile old man.

The second is the most interesting of the bunch, since from what we can see our protagonist takes the unusually tame street cat in because he has nothing better to do and is irrationally enlivened by the belief that the cat is a lucky charm. The movie doesn't push anywhere near hard enough on this idea though. Instead of really getting into the guy's head his thought process is represented by these weird, crude special effects setpieces that appear to take place on the moon.

The third and fourth stories are all right, although they're not terribly ambitious. The third one is a pretty accurate portrait of what a random street cat would do given free reign of a house, as is the fourth one of the cat passively accepting obvious delusions. These are good cats because they are very convincingly cats- adorable fuzzy, arrogant animals with transparently selfish motivation.

The cats themselves are surprisingly convincing actors. In all cases only a single cat was used (well, technically three in the first one I guess), and they all have convincing personalities. Aloof for the first, obedient for the second, aggressive for the third, and completely indifferent for the fourth. A pity that the technical skills of the people who made the film couldn't approach the appeal of the cats themselves although practically speaking they didn't really need to. Like I wrote at the beginning, if you like cats, this movie is for you. Otherwise, there's not much substance here.