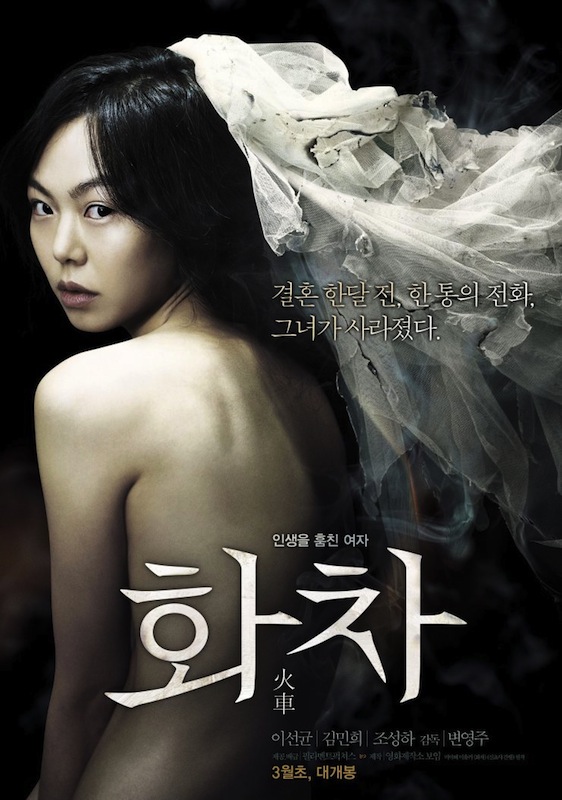 Byeon Yeong-joo's third film, "Helpless", is based off the Japanese novel "Kasha" ("All She was Worth") by Miyuki Miyabe, who's known as the 'queen of crime fiction' in Japan. Miyuki's book provided all the solid narrative elements to allow Byeon to adapted the piece into this fascinating tale that captivated Korean audiences during its run in cinemas earlier this year. The film earned 2,426,575 admissions during that time and it's currently placed 8th for the year, just behind Kim Dae-seung's sexy historical thriller "The Concubine" (2,629,208), but ahead of Moon Hyeon-seong's "As One" (1,867,955).

Numbers aside, it is easy to see why "Helpless" performed as well as it did as Byeon built upon the basic novel elements and gave it cinematic depth and potency. There were some great performances led by Lee Sun-kyun, as well as some well-crafted cinematography that resonates with the film's sense of panic, frustration, and curiosity.

Lee Sun-kyun plays Jang Moon-ho, a man on a mission who is determined to track down his fiancée (Kim Min-hee as Cha Kyeong-seon) who suddenly and mysteriously disappears. Shocked and distraught, Jang seeks the help of his old friend Kim Jong-geun (Jo Sung-ha), a washed-up detective who, for lack of better opportunities in his life, accepts the offer to track down his runaway bride.

Lee Sun-kyun was an interesting choice for this piece; as he is probably better know for playing atypical characters (as Jin-goo in Hong Sang-soo's "Oki's Movie") or appearing in light comdies (such as he played in the 2011 film "The Apprehenders" or, more recently, in Min Gyoo-dong's "Everything about my Wife"). As the main character in the film, Lee had to step up in a number of scenes as his character is forced to confront strong emotions of torment and agony as he follows the breadcrumbs to his lost love. A lot was asked of him for this role and his efforts largely pay off in the film's pivotal moments. However, not all scenes are created equally, and some scenes lost their edge as Lee struggled to pull of the required characterization.

One such scene involved him breaking down in anger and vexation as he is bullied by one of his leads. Although the camerawork didn't do him any favors here, it was distracting enough to pull me out of my emotional investment with his character, softening my empathy for future conflicts. Around the same time as this conflict, the film as a whole lost a little of its momentum and focus. One lead after another became stale, and conflicts and barriers to finding Jo's wife needed to be given new life and purpose. However as threads of the mystery behind his wife and her identity pull together, the film wins you back over with its surprisingly thought-provoking, and rather philosophical, climax and sharp dénouement. It's all brilliantly executed and it has you questioning your emotional reactions and connections to events and key players.

Jo's journey is one of pure frustration and obsession. He is singled-minded in his approach to finding his partner, and the film's visual aesthetic compliments his quest. Byeon Yeong-joo makes use of oblique framing of characters and events, and he even had no qualms about breaking the '180-degree rule' that helps maintain psychological consistency within the frame. Jarring, indeed, but it is never abused and it serves to subvert the conventional manner in which one projects the story to advance in. Unknowingness is what our protagonist is attempting to overcome, for better or worse, and his tenacious pursuit of answers is strongly undermined by the visual inconsistency of the film's use of framing and sequencing. It's a subtly, and at times fragmented and jarring, but the effect is well suited to the film's ultimate destination.

"Helpless" scores big on intrigue and suspense and these are vital elements in a film such as this. The likes of Lee Sun-kyun, Jo Sung-ha and, to a slightly lesser degree, Kim Min-hee gave the film an interesting dimension and angle on, not only the events themselves, but also the viewers reactions and responses to what is seen on screen. "Helpless" finishes strong and the residue from its final moments raises enough interesting questions to make Byeon Yeong-joo's third film a intriguing and worthwhile affair.